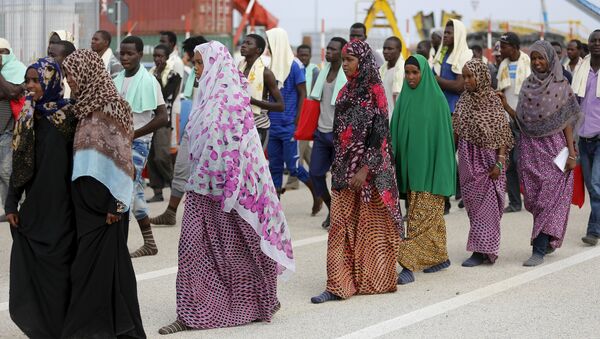 © REUTERS / Antonio Parrinello
Subscribe
International
India
Africa
While some European states erect walls and use armed forces to deal with the migrant crisis, the solution to the problem remains to be found.

People Dissatisfied With Coverage of Migrant Crisis in Mainstream Press
As the European leaders discuss economic integration at the Western Balkans Summit in Vienna, thousands of migrants continue to stream across Europe’s borders, plunging the region into what could be the worst refugee crisis since WWII. Apparently, the only way to solve the problem is to find some sort of general solution that will be obligatory for all European states, says Sergio Romano, a former Italian ambassador to Moscow and a columnist for the Corriere della Sera.

"It is difficult to resolve this issue because we cannot draw the line between those who seek political asylum and social (economic) migrants. We can only do so if we are able to turn back the illegal migrants who leave their countries simply seeking a better life," Romano told Sputnik Italia. "But how can we turn back people fleeing from civil wars and unrest? So this problem is essentially unsolvable."

He also pointed out that restoring order in war-torn Libya would be a serious breakthrough in helping the migrants return to their countries of origin.

Mr. Romano also praised Russia’s offer to the EU to help deal with the crisis by passing a UN Security Council resolution, calling it a friendly and heartfelt gesture.

European Union ‘Overwhelmed’ by Migrant Crisis
"Russia can only offer a relatively small contribution to this problem as it is located far away from the Mediterranean," said Romano. "Russia can always send its warships to help patrol the Mediterranean, but we already have plenty of ships there. The problem is not a lack of ships, but a lack of solutions. Still, it was definitely a friendly gesture on Russia's part."

He also commented on a recent statement by Italy’s Prime Minister Matteo Renzi, who said that it is a mistake to try and "build Europe without Russia." According to Romano, Renzi merely said what the Italian government had been thinking for a very long time.

"While we definitely must not neglect our obligations to our allies, the Italian political class wants to restore relations with Russia," said Romano. "For political reasons, as many Italian politicians believe that Russia is essential to solving many of Europe's problems, and for economic reasons as well. And also for economic reasons, as the sanctions dealt a serious blow to many of Europe’s producers and sectors of industry."