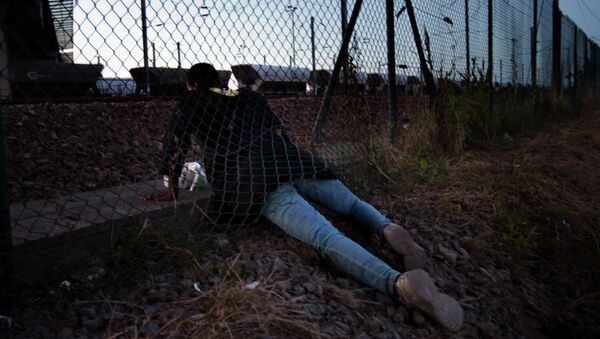 © AP Photo / Emilio Morenatti
Subscribe
As Italian ministers defended themselves from criticism from France and Germany over its handling of the migrant crisis, cracks are beginning to appear in the fundamental principle of freedom of movement throughout the European Union.

"Asking Greece and Italy to do their duty on immigration is like asking a country hit by floods to step up the production of umbrellas," Gentiloni said. "Europe needs to go in exactly the opposite direction from attacking the countries situated on its external borders."

Not Welcome: Europe Builds Fences to Keep Migrants Out - Spanish Media
The issue came to a head as governments across Europe struggled to deal with the mass influx of migrants from the Balkans, the Middle East and Africa. Under the Schengen Agreement, all migrants are supposed to be processed in the country of entry. However, many are using the no-borders policy to travel uninhibited through Europe to the country of their choice.

"The euro and the Schengen zone have been two of the EU's most tangible and widely recognizable achievements. Now, both are faced with considerable, even existential, challenges. The concept of a border-free Europe is being tested by the evolving migration and refugee crisis, with an extremely high number of people from Syria and other conflict regions trying to cross into European countries (mainly Greece and Italy) in an attempt to seek asylum in their final destination country in Northern Europe".

"The limited enthusiasm of most EU states-with the notable exceptions of Germany and Sweden-to undertake any commitments in the context of a burden-sharing agreement promoted by the European Commission is once more testing the limits of European solidarity and the idea of common European policies," Dokos added.

Germany Shamed Schengen Zone Shake-up
The Schengen zone — which excludes the UK and Ireland — has created a huge area within Europe where there are no border controls, but where a huge burden has been put on peripheral nations bordering conflict zones.

Countries such as Italy, Greece and Malta have become overwhelmed by migrants, who travel onwards unchecked to other countries in Europe. This has created a north-south divide, with northern states demanding that asylum seekers stay in the south and southern states demanding northern Europe shoulders its fair share of responsibility.

EU ministers in July failed to agree a deal over the distribution of 40,000 migrants, mostly from Eritrea and Syria. With more than 800,000 due to be arriving in Germany alone this year, there is considerable pressure on EU states to undertake a complete re-think of its migration and no-borders policies.