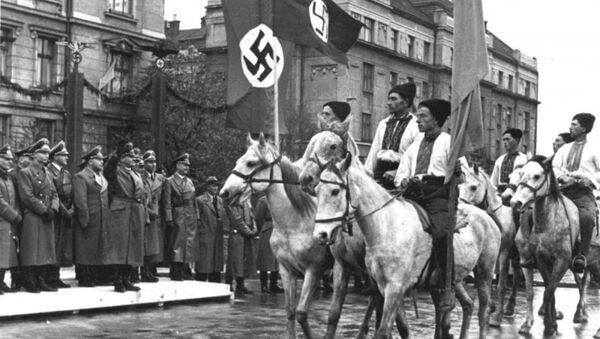 © Wikipedia
Subscribe
International
India
Africa
In an exclusive interview with Radio Sputnik, Israeli publicist Avigdor Eskin explains how history is in danger of repeating, as Kiev is allowed to rewrite the history of the Holocaust, and the lessons of the Second World War are being forgotten.

How strong are neo-nationalist sentiments within present-day Ukrainian society?

On the day of Ukrainian independence, the British Daily Mail newspaper carried an article about the Holocaust, about what the Ukrainian nationalists, those who followed Bandera and Shukhevych, what Ukrainian Nazis did during the war, and this is something which is going to be discussed now more and more, I believe.

We have questions about how the West looked at the current Ukrainian conflict, and now we see that there is a new angle which we are going to take into consideration as well, don't you think?

Terrifying. Witnesses of Ukraine's own holocaust speak out for the first time since WW2. http://t.co/EHzdn3IcOu pic.twitter.com/7t19Mmu55c

I take that you mean that the neo-nationalist sentiments inside Ukraine are being exemplified by the Azov Battalion, and the Right Sector, and people can see it, if they really want to?

Eskin: Well I would rather put the emphasis on something else. The truth is, that you can see some Nazi ideology, racist ideology, anti-Semitism, you can see that in places like Britain especially. There is a discrimination campaign against Israel, which is unacceptable. But this is [limited to] private, little, tiny groups usually, who carry Nazi ideology, and you can see them in Russia.

But in Russia and in other civilized countries, the Nazi ideology is suppressed. People are put on trial and isolated from society if they preach Nazism.

But in Ukraine today, what happened is that not just certain military groups such as you have mentioned, but the president of Ukraine speaks openly about Bandera and Shukhevych being the heroes of the Ukrainian nation.

He claimed officially that the ideology of Ukraine today is Nazi ideology.

The parliament of Ukraine voted for a law which makes all the fighters, who fought on the side of the Nazis, on a par during the war, they made them heroes.

We are not talking about just a few anti-Semitic neo-Nazis or racists or nationalist or ultra-nationalist battalions. We are talking about the ideology which comes from the president, from the parliament, and this is what makes Ukraine very different.

I want to insist upon this point of importance. When we face today this Ukrainian system, we ask what will be the precedent for it, how can we deal with it, because nothing like this happened for the last 70 years, since the Second World War.

And you know, at the Nuremberg trials, one of the defendants there was Julius Streicher. Now, Julius Streicher, who, by the way, was sentenced to death, was not a killer like Himmler, he didn't torture anybody, he wasn't violent. He was nothing more than the head of the Nazi propaganda machine, and he spread hatred and a criminal ideology.

So, the international court and the Nuremberg trials stated that there is such a thing as criminal ideology. And the criminal ideology of Julius Streicher was the cause of his death sentence.

Now, talking about Ukraine today and when the president and the state parliament declare that Nazism is their ideology, how should we treat Ukraine today?

You've touched upon something that I'd really like to discuss, you mentioned that inside the Rada they are making the followers of Stepan Bandera heroes. Do you think that Kiev is trying to rewrite the history of the Holocaust?

Eskin: Well, Bandera is exactly what Julius Streicher was. These are people who were behind mass murder.

The Mail wrote that there were 1.6 million Jews murdered in Ukraine due to the ideology of Julius Streicher, and Stepan Bandera.

NATO Sends Bandera-Style Independence Day Greetings to Ukrainians (VIDEO)
Stepan Bandera gave the reason for Ukrainian nationalists to be as murderous as they were, and even in some places, they started murdering innocent people, Jews, Poles, Russians, before the Germans actually took over. Especially the Lviv pogrom at the beginning of the war with the Soviet Union, they just killed thousands of people before the Germans gave them any instructions or orders, before the final solution decision on the German side.

When we face something like this, in Kiev today, we have to ask ourselves, "what is the legitimacy of this government, no matter what they do?"

No matter what they do today, the moment they announce that their ideology is rewriting history, which of course is one of their goals, and making the worst criminals of the war their heroes, they cease to be a part of any civilized society.

I don't see sanctions against Ukraine, and I wonder why.

How can other Europeans look to Ukraine as someone to have a serious dialogue with?

Eskin: How could the Europeans make peace with Hitler in 1938? How could Mr. Chamberlain in 1938 and 1939 become a close friend of his German counterpart Mr. Ribbentrop. How could the West betray the people during these years, pre-Second World War.

Let's begin from that, this appeasement ideology.