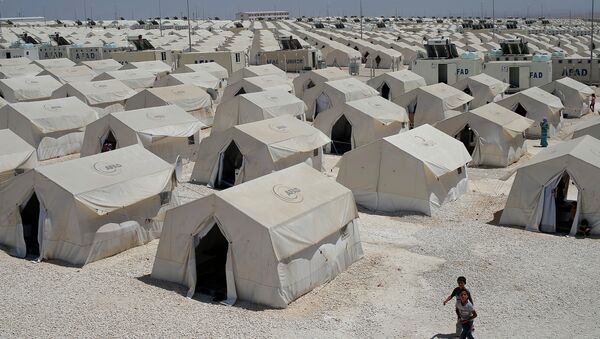 Over 100 People Contract Typhoid Fever in Syrian Refugee Camp - WHO
MOSCOW (Sputnik), Svetlana Alexandrova – Tarek Al-Ahmad, a member of the Syrian Social National Party, arrived in the Russian capital of Moscow on Sunday as part of a delegation of government officials and moderate opposition members.

Al-Ahmad, who met with Russian Deputy Foreign Minister and Presidential Representative for the Middle East and Africa Mikhail Bogdanov on Monday, said "Turkey is in a double trap.”

“Refugees cause economic and social tension inside the country, while refugee camps are turning into the playground for ISIL where ISIL fighters can easily move around, train and recruit new members to send them to Syria,” Al-Ahmad told Sputnik.

Turkey is estimated to be currently hosting some one million Syrian refugees in the wake of a civil war that broke out in 2011, according to the UN Refugee Agency. About 217,000 refugees live in 22 camps on Turkish territory.

For several years Turkey has vigorously advocated for the formation of a “safe zone” along its 511-mile southern border with Syria, asking also for greater US and NATO-member involvement to end the Syrian civil war.

The United States denies having agreed with Turkey to set up a planned 37-mile ISIL-free safe zone.

Ankara recently joined the United States in airstrikes against ISIL on Syrian and Iraqi territories following a spate of terrorist attacks across Turkey last month.

Turkish President Recep Tayyip Erdogan’s proposal to establish a humanitarian safe zone along its border with Syria is an unrealistic campaign slogan that is set up to fail, Tarek Al-Ahmad said.

Al-Ahmad, a member of the Syrian Social National Party, arrived in the Russian capital of Moscow on Sunday as part of a delegation of government officials and moderate opposition members. The group met with Russian Deputy Foreign Minister and Presidential Representative for the Middle East and Africa, Mikhail Bogdanov, on Monday.

"I think the problem of the refugee camps cannot be solved easily and the plan of creating a buffer zone will fail," Al-Ahmad stressed.

The delegate pointed out that the idea to set up the safe zone "is just a slogan for Erdogan’s new election campaign and will not solve the migrant crisis for Jordan and Turkey."

Reports emerged on Monday that Jordan was considering the creation of a safe zone stylized after the Turkish proposal. Ankara has actively advocated the establishment of a 31-mile safe zone along its 511-mile southern border with Syria.

Erdogan announced early elections last week after Prime Minister Ahmet Davutoglu returned a mandate after failing to form a coalition government. Erdogan’s Justice and Development Party (AKP) failed to gain a majority in the June elections for the first time since 2002.

"We know that Erdogan calls for another snap election and promises his people as part of his election campaign that he can solve the Syrian refugee problem," Al-Ahmad told Sputnik.

However, the diplomat stressed, the proposed plan is a "dead circle."