US F-22 Deployment in Europe to Fuel West-Russia Confrontation? 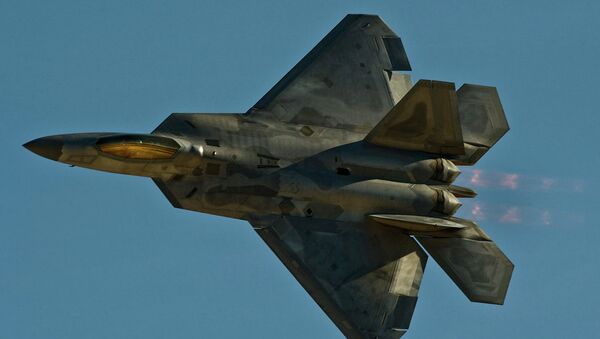 © Flickr / Airman Magazine
Subscribe
The United States continues to flex its muscles and provoke Russia – the US Air Force announced it would deploy its F-22 Raptor stealth fighters to Europe to "enhance regional security."

Officially, the move is to show US allies in Europe Washington's "commitment to the security and stability" on the continent, linking it to the Ukrainian crisis.

"Russia's military activity in the Ukraine continues to be of great concern to us and to our European allies," the air force secretary, Deborah James, told a news conference at the Pentagon.

The exact details, such as the specific number of planes, date of deployment or location were not revealed, but the F-22 deployment will be in line with "a strong and balanced approach to Russia," the Guardian reported.

US Could Deploy New Missiles in Europe - Russian Defense Official
Although the Americans tried to justify the deployment as providing security to their European allies, the move in itself is provocative and may trigger counter measures from Russia. Battle-ready US aircraft flying in the immediate proximity from Russian borders is akin to Russian war planes patrolling the Gulf of Mexico or the coast of the Canadian province of British Columbia, right next to the US border.

Moscow is "closely monitoring" the situation is ready to react if any aggression were to arise, said Franz Klintsevich, a member of the Russian Duma's defense committee.

When first rumors appeared that Washington was considering the deployment of F-22 fighter jets back in June, Vladimir Batyuk, a military expert from the Institute for US and Canadian Studies of the Russian Academy of Sciences, said Russia will likely retaliate against the Pentagon's move.

"The US' possible deployment of its F-22 Raptor fighters in Europe will inevitably provoke confrontation between Russia and NATO; in any case, the Russian side may respond in kind to Washington's move," Batyuk said in June.

He recalled that the Russian Defense Ministry did not rule out that Moscow may deploy additional Iskander mobile short-range ballistic missile systems in Kaliningrad, in response to the possible deployment of US heavy military hardware in Eastern Europe.

This will lead to an additional buildup of both Russian and NATO troops on Russia's border with Europe, which will further aggravate the already tense situation between the West and Russia.

The F-22 Raptor is a twin-seat, double-engine fifth generation tactical aircraft built by Lockheed Martin. The aircraft is considered as a superior fighter jet capable of ground attack, electronic warfare and signals intelligence.