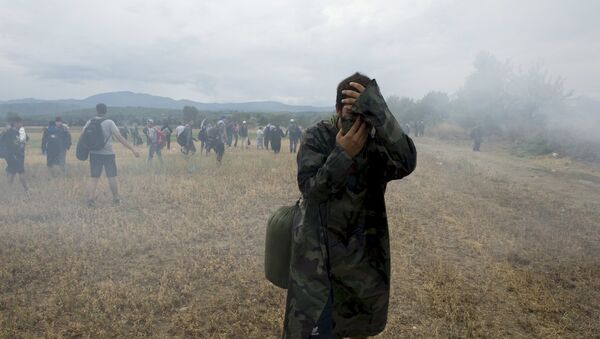 Hot weather is making Greek-Macedonia border crossings for thousands of refugees difficult but not insurmountable, the legal coordinator of the UN refugee agency border team told Sputnik on Tuesday.

MOSCOW (Sputnik) — Over the weekend, thousands of refugees at the Greek-Macedonian border, mainly from war-torn Syria, as well as from Africa and Asia, were allowed to enter Macedonia to transit into Serbia and the European Union, following a several-day standoff.

"The situation is quite difficult, it’s hot and there is a lot of sun here, we are trying to find some shade for the families and the babies. But from the side of the humanitarian assistance it is manageable, we are trying to provide people with sufficient quantities of water, some sandwiches and fruit," Alexandros Voulgaris said.

Kos For Concern: Migrants Spread Across Greek Islands
He said that the Greek army is not currently taking part, but police "are trying to keep some order in the queue. No force is used, they are just trying to keep order, they ask people to sit down, to be in the line."

"There is a queue on the borderline between Greece and FYROM [Former Yugoslavian Republic of Macedonia]. In the queue there are more than one thousand persons here waiting to cross to the other side," Voulgaris said.

Almost 5,000 refugees from Syria, Afghanistan and Pakistan attempted to enter Macedonia from Greece over the weekend.

According to the EU external border protection agency Frontex, the bloc's border checkpoints registered 340,000 refugees between January and July 2015.