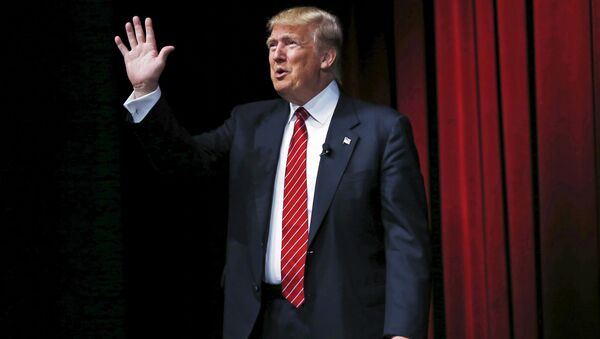 © REUTERS / Jim Young
Subscribe
International
India
Africa
According to Donald Trump, the United States has recently ruined its relations not only with Russia but with countries throughout the world; "Nobody likes us… we are like a big bully," Trump said.

Trump's Pro-Russian Rhetoric Makes Plain Business Sense – Israeli Publicist
In an interview with Fox News Republican presidential frontrunner Donald Trump, emphasized that he could have normalized relations with Russia; Trump added that Washington had ruined relations with almost everybody in the world, "nobody likes us," the politician noted, "we are like a big bully."

"I think that Putin, frankly, is somebody I actually can get alone with… You know I had a big event in Moscow about two years ago, I think I had very good relationship with Putin and it's ridiculous what's happening," Trump said in a reference to the current cooling in relations between the Kremlin and Washington.

It is not the first time Trump has said that Russian President Putin is someone "that can be dealt with" and pledged that he will try to mend fences with Russia if he is elected the next US president.

Trump's pro-Russian rhetoric has already attracted the attention of experts and political analysts.

So what if Trump wins the US presidential race? Would it usher in an era of a new US-Russian reset?

According to some Western analysts, Trump would be a "Godsend" for Russia, others suggest that Trump is "America's Putin"; on the other hand, some experts even go so far as to claim that the Kremlin will just "eat Trump for lunch" if the Republican candidate assumed the high position.

So, is Trump really that pro-Russian?

However, that does not mean that Trump would support Russia's geopolitical interests in the Middle East or Latin America, he noted.

In his Op-Ed for Sputnik Edward Lozansky, the President and Founder of the American University in Moscow, stressed that he "would give him [Trump] a chance."

Among American hawkish policymakers Trump sounds like the only pragmatist who is really concerned with US national interests.

"As for the huge crowd of presidential candidates, it looks like so far the only one who promises to fix the US-Russia relations thus avoiding a looming disaster is Donald Trump," the expert underscored.