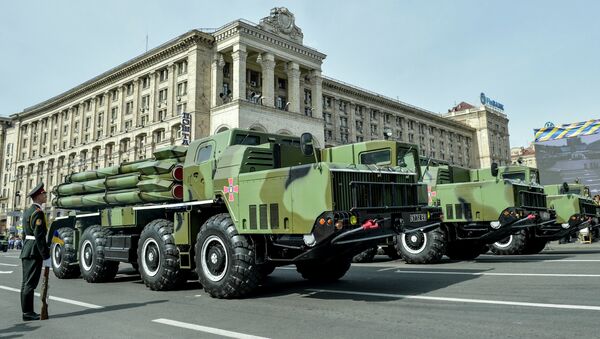 The Ukrainian army is expected to receive 400 vehicles and other military equipment by the end of the year. The country is on the verge of bankruptcy, but Poroshenko prefers to invest in the defense industry, Austrian Contra Magazin wrote.

Austrian journalist Marco Mayer argued that the policy of Ukrainian politicians has reached high levels of hypocrisy and schizophrenia.

On the one hand, Kiev has announced reforms to strengthen the economy; on the other, it has spent huge amounts of money on military equipment to continue war against Donbass militias.

"The military threat from the East is a foreseeable perspective for the future decades," Poroshenko said, adding that the modernization of the army is a top priority for Ukraine.

Kiev Ready to Cut Ukraine Off Donbass – Former President
Ukraine has long been demanding weapons supplies from the West, but the EU and the US have so far officially rejected the appeal. Recently, Poroshenko stated that Kiev had received 500 units of special equipment from abroad.

Ukrainian politicians seemingly are not worried about the fact that their country is on the verge of national bankruptcy: its already weakened economy has experienced further downturn due to the war in the East of the country, Mayer argued.

The funds from the IMF and the EU which could be used to stabilize the national economy are flowing into the military sector. Thus, international donors are only contributing to the deterioration of the situation and postponing a peaceful solution of the conflict, the author wrote.