Poroshenko Deploys Over 170 Units of Armory to Fight Donbass 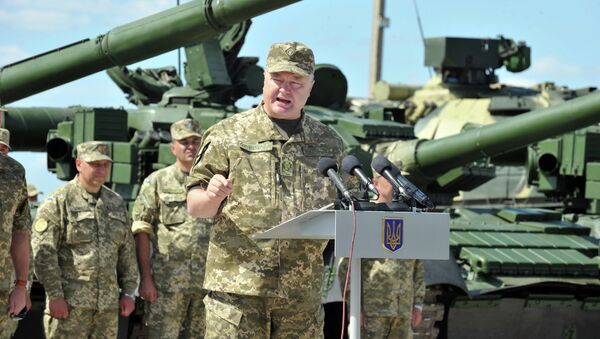 © AFP 2022 / SERGEY BOBOK
Subscribe
Looks like Ukraine is preparing for opening active warfare on the eve of the country’s independence day – over 170 items of military equipment will be delivered to army divisions now deployed in Donbass over the next few days.

After US 'Leaves Ukraine to Collapse', Russia Will Provide Help
Ukraine President Petro Poroshenko has conveyed certificates for various kinds of military hardware to members of armed forces of the country during his visit on the training range in Chuhuiv, Kharkiv region, Saturday, according to the country’s Ministry of Defense.

Armaments are set to be tested and within two days sent to the so-called Anti-Terrorist operation (ATO) zone in the east of the country. And it probably should be tested first – the point is that the big part of the delivery consists of old equipment repaired by the Ukrainian military-industrial complex.

Still, the list of the armament looks like the country is getting prepared for active warfare.  More than 25 tanks, including the BM "Bulat", T-64BV, T-72, T-80; multiple-launch rocket systems “Grad,” anti-aircraft missiles, anti-tank complex "Stugna," anti-tank cannons and howitzers, a large number of vehicles such as the Hammer.

Ukrainian Conflict Parties Continue to Deceive Each Other – Austrian Media
According to official Ukrainian information, Poroshenko attended the ceremony of conveying the hardware along with top military officials, and later took part in the pompous military parade. Poroshenko awarded 15 troops, who were involved in the war conflict against Donbass residents, with medals for “protecting the sovereignty of Ukraine,” local media reported.

Meanwhile, Ukraine is actively working on repairing old military equipment – some 1000 items have been fixed in 2015 and this process is still going on, Poroshenko explained.

Despite the fact Kiev’s authorities pinned their hopes of arms delivery from the West, Ukraine received only a mere 500 units of equipment, excluding lethal weapons. They got radar locators, night vision devices, thermal imagers and radio stations through international assistance.