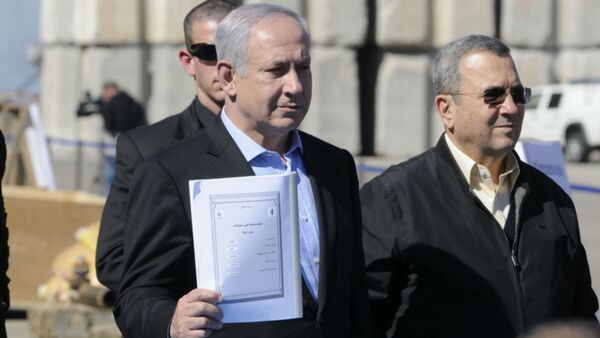 Don't Even Try: Kerry Warns Against Possible Israeli Attack on Iran
The audio tapes were obtained by Channel 2 as part of a biography on the former Israeli Defense Minister, titled "My Life’s Wars." Upon learning of the audio tapes, Barak reportedly attempted to block their broadcast, claiming it would violate military censorship rules. However, military censors allowed for it to be reported.

In the recording, Barak can be heard discussing plans he and current Israeli Prime Minister Benjamin Netanyahu, had for striking Iran in 2010, 2011, and 2012. The operations in 2010 and 2011 were foiled by Israeli ministers who Barak claimed had cold feet.

The first attempt in 2010 was prompted by Netanyahu’s conviction that Iran would enter a "zone of immunity" if Israel did not act immediately. At the time, he argued that the Islamic Republic’s nuclear facilities would be too well developed to render any attack effective – a position he maintains until this very day.  Both he and Netanyahu enlisted then-army chief Gabi Ashkenazi to declare the Israeli Defense Forces (IDF) were “beyond the threshold of operational capacity,” Barak can be heard saying in the recording.

But Ashkenazi refused, saying the operation was not feasible, and hijacking the attempt.

"He created an untenable solution," Barak said about Ashkenazi in the recording. "You cannot go to the Cabinet when the chief of staff says to you 'I’m sorry, but I told you no.'"

So in 2011, when Ashkenazi was replaced with Benny Gantz who was more amenable to the operation, Netanyahu and Barak tried again. This time, they met with the so-called “forum of eight” senior ministers at the Mossad headquarters, hoping to get a majority approval before taking the plan to the full Cabinet.  Since many of the ministers opposed the operation, they were counting on the votes of Moshe "Bogey" Ya’alon, who would then replace Barak as Defense Minister, and Yuval Steinitz, to get the majority they needed.

Ya’alon and Steinitz are known to be vocal anti-Iran hawks, even in the current administration, and were initially believed to be in favor of the operation. But, according to Barak, the two "melted."

"Bibi [Netanyahu] was supposed to ensure [the support of Ya’alon and Steinlitz]," Barak said. "At a certain stage of consultations, Bibi said they were in favor, it’s ok."

"Then we held a discussion on it in the forum of the eight," he explained. "The chief of staff lays it all out – all the difficulties, the complications, the complexities and the problems including the possibility of losses – and you see Bogey and Steinitz crumbling in front of your eyes…I saw before my own eyes how Steinitz and Ya’alon were melting."

The last attempt, which had already been reported in the media, was in 2012, and according to Barak, Israel was pretty much ready to go had it not been for a slight scheduling issue. At the time, the IDF was scheduled for a major joint military drill with the United States.  To avoid the overlap, Barak convinced then US Defense Secretary Leon Panetta to reschedule the drill, but according to the Jerusalem Post, the new date also didn’t allow for enough time to execute the operation.