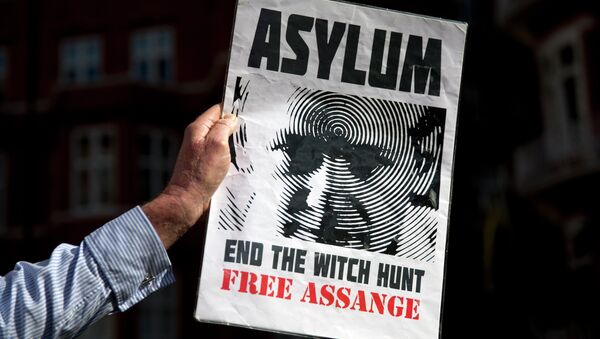 The proposed law would guarantee the protection of whistleblowers if they have revealed information leading to the arrest and prosecution of those who commit wrongdoing, Assange specified.

"I would like to appeal to Mr. Francois Hollande. If France really wants to protect the rights of its journalists and its population, it must enable communication and sharing of information. It is necessary to have a law that guarantees the protection of whistleblowers," Assange said during a videoconference, as quoted by BFM TV.

Swedish Plan to Question Julian Assange at London's Ecuador Embassy Stalled
The proposed law would guarantee the protection of whistleblowers if they have revealed information leading to the arrest and prosecution of those who commit wrongdoing, he specified.

His remarks were greeted with cheers, the French TV channel said.

Assange spoke from the Ecuadorian embassy in London during an annual congress organized by France’s Europe Ecology – The Greens party.

Assange launched the WikiLeaks website in 2006. Since that time the site has released millions of classified diplomatic documents from around the world revealing numerous espionage practices, war crimes, torture and many other human rights violations.

The editor-in-chief of the website has been residing at the Ecuadorian diplomatic mission in Britain since 2012, fearing extradition to the United States where he could face espionage charges.

In early July, Assange asked France for political asylum but the appeal was denied.