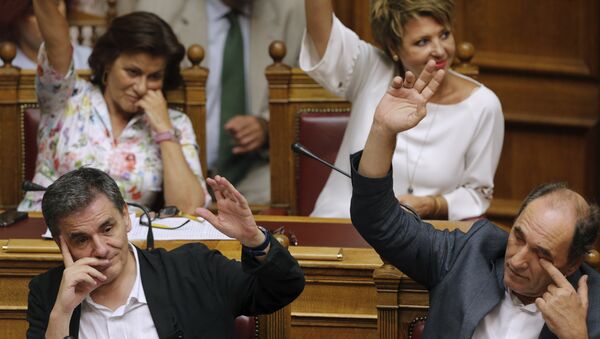 A Greek lawmaker told Sputnik that Golden Dawn party will be given a mandate to form the government.

MOSCOW (Sputnik) — The third party to be granted a mandate to form a new Greek government will be the far-right Golden Dawn, MP from the New Democracy Party, Makis Voridis, told Sputnik on Friday.

"The third party to receive a proposal to create a government will be the Golden Dawn," Voridis who is a former Minister for Infrastructure, Transport and Networks, said.

"I do not think that New Democracy will manage to create a new government, it will not manage to form a parliamentarian majority," Voridis, who is a former Minister for Infrastructure, Transport and Networks, said.

Main opposition New Democracy Party will refuse to form coalition with the left-wing SYRIZA party in case it wins the snap parliamentary elections.

"SYRIZA, the party of the resigned Prime minister, will not participate in any kind of discussion around creating a coalition right now. Without their votes, with actually now are 118, it is practically impossible to form any kind of government," Voridis stressed.

Golden Dawn is a radical right party, whose 69 members have been accused of creating and running a criminal organization.