Tear Gas and Barbed Wire: Why Europe’s Tough Stance on Migrants Is Failing 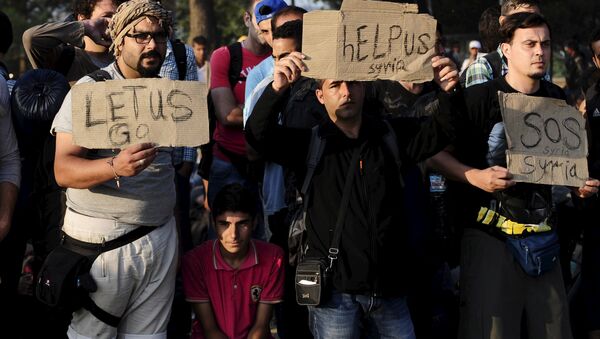 © REUTERS / OGNEN TEOFILOVSKI
Subscribe
There has been fresh criticism of Europe's response to the ongoing migrant crisis after authorities in Macedonia used tear gas and stun grenades to disperse crowds near the country's borders. While many countries have used a touch stance, it seems the approach is failing to address the real issues.

Human rights groups have slammed the approach taken by Macedonian officials after riot police, despite being separated by barbed wire, used tear gas and stun grenades on groups of migrants queuing at the country's border with Greece.

Skopje declared a state of emergency in reaction to the influx of migrants passing through the country, with many people hoping to travel from Greece, through Macedonia and onto other northern European countries.

Although, the use of tear gas and stun grenades may not be in place elsewhere, the heavy-handed approach taken by the authorities is something used throughout Europe to combat the migrant crisis.

At Calais in France, British officials have bulked up security and pledged more resources to try and stop people from making the trip across the English channel to the UK.

While Hungary has also made moves to prevent the illegal crossing of asylum seekers with the construction of a fence to protect the country's borders from those entering from Serbia, which is a non-EU country.

Not Addressing the Problem

Why are the headlines about the waves of migrants on EU's borders and not how we destroyed the countries they all come from?

Despite officials in the UK and other countries claiming that their tough approach to migrants is working, others have suggested that is not addressing the root of Europe's migrant crisis and is merely shifting the problems elsewhere.

This comes amid revelations that Sweden's largest port of Gothenberg is becoming a haven for migrants hoping to reach Britain.

While all eyes are on #Calais, migrants are reaching UK on cargo ships from Sweden. http://t.co/G1P64DPTT5 #göteborg pic.twitter.com/4E6DmjbSlj

Port authorities have warned that they have found rising number people hiding aboard cargo ships and in the port, in the hope of making the risky voyage to the UK.

The port's security chief Thomas Fransson told Swedish newswire TT that there are serious concerns over the safety of stowaways.

"They are taking big risks, we are afraid that someone will die," he said.

"It's a very big problem, we are not prepared for this."

These revelations have added to the criticism of the tough approach applied by some European countries, with critics arguing that blocking migrants from crossing certain borders only shifts the problems elsewhere, and doesn't stem the desire for people to come to Europe in the search of a better life.

A Problem for the EU

Critics of the EU's immigration policy have blamed Brussels for the increase in number of people making so-called illegal journeys to Europe, arguing that a lack of legal avenues has seemingly forced people to resort to desperate measures in their quest to flee poverty-stricken or war-torn countries.

Mind your language. The EU's 'migrant crisis' is better understood as a failure of the political class.

Many say that this approach has led to more people risking their lives to reach Europe, and has in fact facilitated the growth in people smuggling operations due to the overwhelming demand from people hoping to enter Europe.

What exactly has #HomeSecretary signed that differs from the mandate that @Europol_EU already has regarding people smuggling? @Number10press

Additionally, while the response of non-EU countries like Macedonia has been heavily criticized, many have agued that the crisis is essentially a result of EU policy, with migrants hoping to travel to wealthier northern European countries after arriving in Greece.

Time for the EU to give back that Nobel Peace Prize? #Macedonia http://t.co/kFQbRq8d4n pic.twitter.com/mNczYYU0TJ

While many migrants make it through to northern Europe, many others are left stranded in non-EU countries like Macedonia and Serbia, adding extra pressure to both asylum seekers and the countries that in many cases are unable to handle the influx of people.

000000
Popular comments
Sputnik has a Westernized view of "immigration". I seriously doubt many of these articles are written by actual mainstream Russians. The answer is to stop the wars and exploitation, not try to squeeze 7 billion people into Europe, Canada and the US.
jas
21 August 2015, 18:33 GMT
000000
Newsfeed
0
New firstOld first
loader
LIVE
Заголовок открываемого материала
Access to the chat has been blocked for violating the rules . You will be able to participate again through:∞. If you do not agree with the blocking, please use the feedback form
The discussion is closed. You can participate in the discussion within 24 hours after the publication of the article.
To participate in the discussion
log in or register
loader
Chats
Заголовок открываемого материала
Worldwide
InternationalEnglishEnglishMundoEspañolSpanish
Europe
DeutschlandDeutschGermanFranceFrançaisFrenchΕλλάδαΕλληνικάGreekItaliaItalianoItalianČeská republikaČeštinaCzechPolskaPolskiPolishСрбиjаСрпскиSerbianLatvijaLatviešuLatvianLietuvaLietuviųLithuanianMoldovaMoldoveneascăMoldavianБеларусьБеларускiBelarusian
Transcaucasia
ԱրմենիաՀայերենArmenianАҧсныАҧсышәалаAbkhazХуссар ИрыстонИронауОssetianსაქართველოქართულიGeorgianAzərbaycanАzərbaycancaAzerbaijani
Middle East
Sputnik عربيArabicArabicTürkiyeTürkçeTurkishSputnik ایرانPersianPersianSputnik افغانستانDariDari
Central Asia
ҚазақстанҚазақ тіліKazakhКыргызстанКыргызчаKyrgyzOʻzbekistonЎзбекчаUzbekТоҷикистонТоҷикӣTajik
East & Southeast Asia
Việt NamTiếng ViệtVietnamese日本日本語Japanese中国中文Chinese
South America
BrasilPortuguêsPortuguese
NewsfeedBreaking
08:28 GMTQueen Elizabeth 'Misses Church' Due to Health Concerns After Hospital Stay
08:28 GMTGerman Ambassador Calls Surging Gas Prices Pan-European Issue
08:25 GMTKashmiri Students Beaten Up in Punjab After India Loses Cricket Match to Pakistan
08:18 GMTUK Government's Transparency Was Worst on Record in 2020, New Report Alleges
07:37 GMTFinnish Defence Ministry Demands Risk Assessment for Nuclear Plant Project Over Russian Ties
07:36 GMTCOVID in Israel May Be Under Wraps Now, But a Fifth Wave Looms Large, Experts Warn
06:23 GMTDenmark Sees Record Infection Spread Despite High Vaccination Rate
06:05 GMTUK Autumn Budget: Labour Shadow Chancellor Accuses Treasury of 'Smoke and Mirrors' Policy
05:31 GMTLive Updates: Sudan's PM Transported to Unknown Location After 'Refusal to Back Coup'
05:17 GMTDanish Conservative Politician Sparks Uproar With Photo in See-Through Lingerie
04:27 GMTSudanese Opposition Union Calls on People to Protest Against Military Coup
04:00 GMT'What's-His-Name?' Nancy Pelosi Appears to Forget Donald Trump's Name
03:17 GMTFacebook Exec Reportedly Warns Employees of 'More Bad Headlines' to Come
03:16 GMTSudan’s Prime Minister Under House Arrest, 4 Ministers Detained - Reports
02:16 GMTIsrael Going Further With Construction of Over 1,300 Housing Units in West Bank
01:15 GMTPandemic Will End When World Chooses to End It, WHO Chief Says
YesterdayJamie Lynn Spears Says Parents Pressured Her to Get an Abortion to Maintain Her Career
YesterdayFriends Alum James Michael Tyler Dead After Battle With Prostate Cancer Battle
YesterdayMeghan McCain Thanks Trump for Publicity After 45's Scathing Statement Against Her Late Father
YesterdaySmoke in the Cabin Forces American Airlines Flight to Make an Emergency Landing