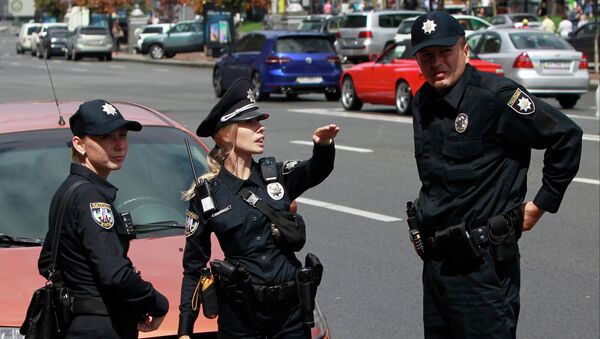 The newly appointed head of the Ukrainian city of Lviv police patrol Yuriy Zozuly seems no match for the city's criminals, who relieved him of two notebook computers on his first day in his new job.

Ultra-Right Militants Acting Like Cops in Ukraine's 2nd Largest City
New head of Lviv's police Yuriy Zozuly had his work cut out for him on his first day in the job on Thursday, when thieves broke the window of his car and made away with documents and two notebook computers.

The robbery occurred on Thursday afternoon while Zozuly, who will start overseeing the Ukrainian city's patrols on August 23, was attending training at the Ministry of Internal Affairs campus in Lviv.

The young police chief left a rucksack in plain view of opportunistic passing thieves, who broke the window of his Subaru and took the bag, which contained documents and the two notebooks.

"The new chief of the Lviv police, who has been transferred from Kiev, was today robbed when thieves broke the window of his car and stole a folder of documents and notebooks," a source in the police confirmed the theft to the Ukrinform news agency.

Kiev's New Cops Prove Glamorous but Unprofessional
Tracking down the thieves and the stolen equipment is sure to be one of the first tasks of the new police force in Lviv, where the city's 600 new officers hit the streets on Zozuly's orders from August 23.

Zozuly's new job is a promotion from his previous position as a sergeant in the Kiev police force, where he served as assistant to the commander of Kiev's third police battalion. He is a veteran of the Maidan unrest which led to the ousting of Ukrainian President Victor Yanukovych in February 2014.

Zozuly's inauspicious start to the job came on the same day that Ukraine's Minister of Internal Affairs Arsen Avakov praised 26-year-old Zozuly and his qualifications for such a commanding position in Ukrainian law enforcement:

"From the first to the last at Maidan, an active participant of the revolution of dignity. A student of the National Academy of Internal Affairs, who also attended university in Poland. Before becoming a member of the police force, Zozuly also did some work in the financial sphere."

Yuriy Zozuly and Lviv's new police force are hitting the streets a week earlier than originally planned on August 28, amid concerns about a lack of experience among recruits to the new-look national police force.

The 600 new police officers in Lviv are some of 2,000 new recruits to the new national police force, the institution of which was signed into law by President Petro Poroshenko on August 4, and rebranded 'Politsiya' instead of the previous 'Militsiya,' its name during the Soviet era.