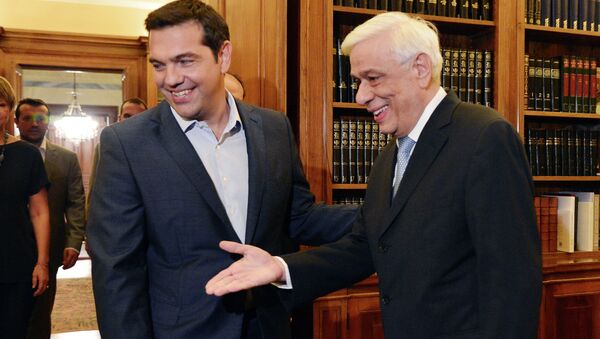 © AFP 2021 / LOUISA GOULIAMAKI
Subscribe
According to reports, Greek President Prokopis Pavlopoulos has granted the leader of Greece's official opposition and head of the center-right New Democracy party Vangelis Meimarakis a mandate to form a new government.

Meimarakis has previously stated that he will use his right to attempt forming a government.

Tsipras, who has been facing dissent in his anti-austerity Syriza party, resigned to open the possibility of early general elections in a bid to secure support for his stand on the new bailout agreement with the country's creditors.

According to media reports, Greece could hold snap parliamentary elections as early as on September 20.

On August 14, the Eurogroup approved the third bailout package for Athens, worth 86-billion-euro ($95-billion), in exchange for more austerity reforms that include tax increases and pension cuts.