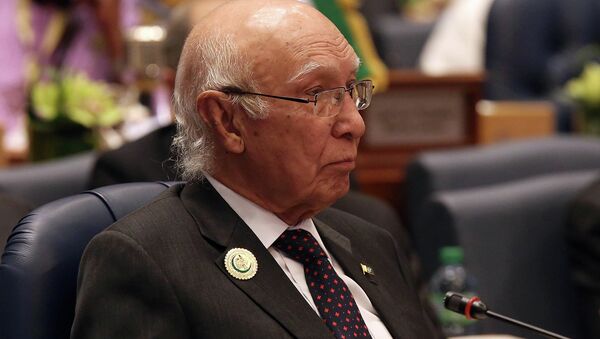 India suggested that Pakistani National Security Adviser Sartaj Aziz should not meet with Kashmiri separatist leaders during an official visit to New Delhi, a Foreign Ministry spokesman said Friday.
India Summons Pakistani Envoy Over Ceasefire Violation, Civilian Deaths
NEW DELHI (Sputnik) – Pakistan's High Commissioner has invited Kashmir separatist leaders to a meeting with Aziz before the India-Pakistan talks in New Delhi. India considers the invitation to be counter to the spirit of the talks.

"India has advised Pakistan that it would not be appropriate for Mr. Sartaj Aziz to meet with Hurriyat representatives during his visit to India as it would not be in keeping with the spirit and intent of Ufa [summit] understanding to jointly work to combat terrorism," Vikas Swarup told reporters.

Indian National Security Adviser Ajit Doval will meet with Sartaj Aziz to hold the talks at the level of national security adviser in New Delhi on August 23-24.

Following the meeting at the Shanghai Cooperation Organization (SCO) summit in the Russian city of Ufa in July, Indian Prime Minister Narendra Modi and his Pakistani counterpart Nawaz Sharif said in a joint statement that they were committed to strengthening peace efforts and promoting cooperation.

On Thursday, sources in the Jammu and Kashmir state government told Sputnik that Kashmiri separatist leaders had been placed under house arrest in the city of Srinagar to prevent the meeting with the Pakistani official.

Relations between India and Pakistan have been strained, since the end of British rule in 1947, by their rival claims to the region of Jammu and Kashmir. Four wars and numberous military conflicts later, India and Pakistan agreed to a ceasefire in 2003. Both sides, however, have repeatedly accused each other of violating the truce.