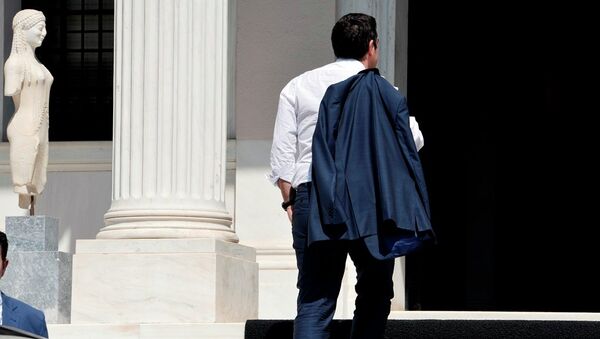 New Democracy, the second largest party in the Greek parliament, says it will try to form the country’s new government following the resignation of Greek Prime Minister Alexis Tsipras, The Telegraph reports.

MOSCOW (Sputnik) – The leader of the center-right opposition party, Evangelos Meimarakis, said at a press conference on Thursday, as quoted by The Telegraph, that Tsipras’s decision to resign was "dishonest."

According to the Greek constitution, the leaders of the opposition have three days to work out whether or not they can come up with a viable parliament. If the leaders of the second and third largest parties in Greece fail to form a new parliament, a caretaker regime can be put in place.

The Telegraph said on Thursday that Meimarakis intended to consult with the Greek centrist POTAMI (The River) party and social democratic party PASOK (Panhellenic Socialist Movement) on the issue of forming a new government.

Tsipras, who has been facing dissent in his anti-austerity Syriza party, announced his resignation on Thursday to open the possibility of early general elections in a bid to secure support for his stand on the new bailout agreement with the country's creditors.

The Eurogroup approved the third, 86-billion-euro ($95-billion) bailout package for Greece on August 14. It stipulates austerity measures such as tax hikes and pension cuts that the Greek population has largely been opposed to. The ruling Syriza party promised to revise the measures after securing victory in the January parliamentary elections.

According to latest media reports, Greece could hold snap parliamentary elections as early as on September 20.