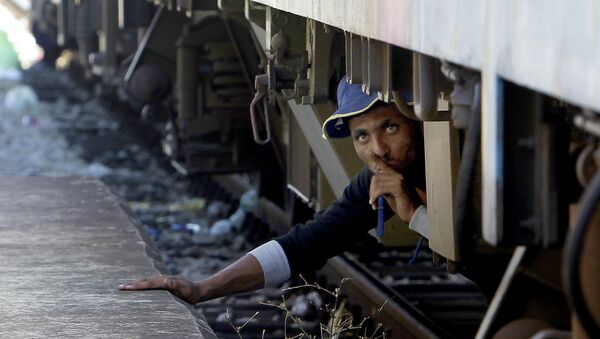 Macedonian authorities have reportedly announced a state of emergency at its southern border with Greece due to the influx of migrants into the country.

Slovakia Unattractive for Muslim Migrants - Interior Ministry
On Thursday, Macedonian authorities said that they had declared a "state of emergency" at the southern border with Greece and that they would deploy army units to the area to help control the influx of migrants crossing the border, according to media reports.

"Due to an increasing pressure on the southern border… it is estimated that bigger and more efficient control is needed in the region where illegal border crossings from the Greek side have been massively registered," a government statement read, as reported by AFP.

Declaring a state of emergency legally allows for the "appropriate engagement of the army", according to the statement.

The government voiced hope that the army deployment will help to "increase security of the local population" and to improve the handling of migrants crossing the border from Greece.

France to Use Emergency Funding to Accommodate 500 Migrants
The government declined to elaborate on how many soldiers would be involved in border control.

Migration crisis in Europe has increased over the past year due to the increasing flow of migrants from North Africa, the Middle East, as well as Central and South Asia.

According to the UN refugee agency, about 250,000 migrants have already come to Europe by sea routes.