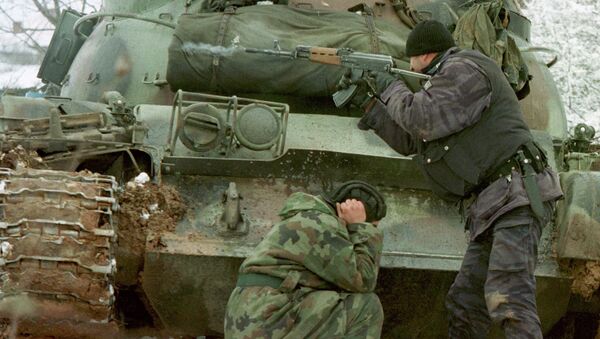 © AP Photo / David Brauchli
Subscribe
The creation of a special court on war crimes was only recently approved by the authorities of the self-proclaimed republic of Kosovo.

Kosovo Court For War Crimes 'Step Toward Justice' - Rights Watchdog
Pictures of former Kosovo Liberation Army (KLA) members who might be accused of war crimes by a special court, including  Deputy Premier of Kosovo and Foreign Minister Hashim Thaci, Speaker of Parliament Kadri Veseli, Vice Speaker of the Parliament Dzavit Haliti, former Prime Minister Agim Ceku and others,  were published on by a Pristina daily called Bota Sot.

The creation of a special court on war crimes was only recently approved by the authorities of the self-proclaimed republic after a year of intense international pressure.

According to the newspaper, investigators from Kosovo will be working with the court that will be based in The Hague, though they are concerned that Pristina establishment might target them for prosecuting their friends and former comrades-in-arms.

The first cases to be reviewed by the new court are linked to a report by Swiss politician Dick Marty regarding the alleged illicit organ trafficking in the 2000s involving high-ranking KLA officers.

EU Kosovo Mission Accused of Trying to Silence Whistleblower
One such case details the killing of 14 Serbian peasants on July 23, 1999 in which, according to an investigation by UNMIK, the subordinates of Hashim Thaci were involved. The new court should probably consider the bitter experience of the International Criminal Tribunal for Yugoslavia, when dozens of witnesses in cases involving KLA officers died in murky circumstances.

Fadil Lepaja, a political scientist from Pristina, told Sputnik that today witnesses should feel themselves safer than before because Kosovo politicians and the public opinion have a much lesser influence on the new court. He pointed out that previously the crimes of former KLA members were investigated by courts set up by EULEX and UNMIK, which were subjected to constant pressure by the accused themselves and suffered from corruption.

Former Kosovo MP Rada Trajkovic also noted that virtually all of the KLA leadership was in bed with the Western intelligence services.

It remains unclear whether these agencies will attempt to protect their ‘assets.’ But if the international community intends to expose those who conducted systematic ethnic cleansing and targeted people based on their ethnicity to murder them and harvest their organs, the guilty must pay for their crimes.