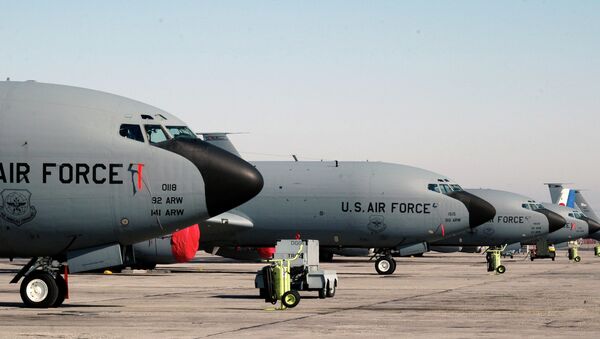 On Thursday, the US-Kyrgyz cooperation agreement on aid lost its legal force, following a decision made last month by a Kyrgyz government irritated over Washington's continued interference in its internal affairs. In an article for RIA Novosti, journalist Vladimir Ardaev explained why losing Bishek is an important blow to US plans for Central Asia.

Kyrgyzstan Accuses US of Scheming to Create Situation of Controlled Chaos
The treaty on "Cooperation to Facilitate the provision of Assistance," signed in 1993, was officially aimed at "facilitating the provision of humanitarian, economic and technical assistance" to the people of Kyrgyzstan. The agreement provided for US aid to the country to be brought into and out of the country without the levying of taxes and customs duties. Moreover, US aid workers and military personnel were granted near-diplomatic status.

Last summer, the US military air base in Manas, outside Bishkek, long serving as a key logistics hub for the transport of goods and forces to the NATO coalition in Afghanistan, was closed. With Bishkek denouncing its cooperation agreement with the US late last month, and the agreement on Kyrgyzstan's accession into the Treaty on the Eurasian Economic Union stepping into force on August 12, Ardaev argued that the country's actions are a signal that "the country is demonstrating, step-by-step, the consistency of its foreign policy, and finally coming to define its own priorities."

Adzhar Kurtov, senior research fellow of the Russian Institute for Strategic Studies, explained that "although the Eurasian Economic Union is an economic union of states, economics does not happen without politics, and in this case, without geopolitics as well. Kyrgyzstan long held a position of simultaneously 'sitting on two chairs', receiving aid from the West while at the same time cooperating with its neighbors –now partners in the Eurasian Union. [But] today, the political situation has changed so much that the time has come for the Kyrgyz leadership to choose with whom and how it would build its strategic relations. And we are now witnessing this process of self-determination."

Kyrgyzstan Terminates Cooperation Agreement With US
Kurtov recalled that in the 1990s, Kyrgyzstan was forced to make a number of one-sided concessions in its agreements with Western partners, from perceived inequities in the contract with Canadian gold mining company Centerra Gold, operating the Issyk-Kul Kumtor gold mine, to the US agreement on aid, which resulted in obvious departures from the norms of international law –particularly with the provision of diplomatic immunity to a wide circle of aid and other personnel.

As Ardaev explained, "such agreements were viewed in an unambiguous way by Kyrgyzstan's partners in the post-Soviet space. Russia saw in them obvious violations of Bishkek's sovereignty, with the aim of putting its leadership under a measure of control, and of creating a system of dependency on the West." Kurtov emphasized that "the liquidation of such a system corresponds not only to the interests of the current Kyrgyz authorities, but with Russia's interests [as well]. This sequence of steps includes the removal of the US air base at Manas, and Bishkek's joining the ranks of the Collective Security Treaty Organization, (CSTO)" a military alliance aimed as a counterbalance to NATO.

World
ISIL to Shift Recruitment Focus to Caucasus, Central Asia, Indonesia
According to the expert, Kyrgyzstan's participation in the CSTO confirms that the country's authorities share the assessment of its partners regarding the threats to Central Asian security, from the ongoing civil war in Afghanistan, associated with the long-term presence of the NATO military contingent, to threats emanating from the Middle East.

"It has become patently clear that the Kyrgyz leadership has decided to show its partners in the EEU and the CSTO its willingness to stick to one specific line in its defense and foreign policy," Kurtov noted.

Soft Power in Action: Washington Would Love to See Regime Change in China
Citing Institute of CIS Countries expert Grigori Mikhailov, Ardaev explained that "the Kyrgyz leadership has to consider not only the position of Russia, but also the view of its other big neighbor in the Shanghai Cooperation Organization – China."

"Chinese influence in Kyrgyzstan has recently increased," Mikhailov stressed. "It's worth remembering that Kyrgyzstan serves as a place where the interests of Russia, China and the United States intersect," he added. "Demonstratively distancing themselves from Washington gives Bishkek a chance to count on greater economic cooperation with China, and the growth of Chinese investments."

Kurtov recalled that "China has always, explicitly or implicitly, expressed its concern over US military presence in areas sensitive to Beijing, in particular, their presence in the vicinity of the [western] regions of China, Tibet and Xinjiang. Kyrgyzstan is situated in the immediate vicinity of the Xinjiang Uygur Autonomous Region, and the reduction of American military presence in the region can only be welcomed by Beijing," the expert noted.

Ultimately, Mikhailov explained that Bishkek's multi-vectored foreign policy, used by former President Askar Akayev, has now simply outlived its usefulness. The policy of 'being friends with everyone' has proved impossible in the present circumstances. Today, Ardaev explained, "the government of Almazbek Atambayev has finally set out to define his country's priorities" in foreign policy.

With the US, Business Almost As Usual (Minus Interference in Internal Affairs)

Scandal in Kyrgyzstan After Protest Organizer Seen With US Diplomat
Ardaev emphasized that Bishkek's denunciation of the cooperation agreement with Washington does not mean Kyrgyzstan will break off relations with the US completely. Rather, "it limits the ability of the US to influence the internal political situation in the republic."

The expert noted the US Embassy will continue its work, while non-governmental organizations will continue to operate, evRen though the rules on their operations have been tightened recently, with foreign funded groups now having to register as 'foreign agents' if they encroach on politics.

In any case, with the US Embassy in Bishkek voicing its "disappointment" over the Kyrgyz government's decision, calculating that it has spent nearly $2 billion over the past two decades in the aims of "supporting the Kyrgyz Republic's transition to democracy," Ardaev pointed out that this figure "is comparable, for instance, with direct investments into Kyrgyzstan's economy from neighboring Kazakhstan ($1.5 billion) or with trade with Russia only in the last year ($1.9 billion)." Mikhailov added that "migrant workers from Russia alone send an amount equal to one third of the country's GDP," or roughly $2.4 billion, back home.

US 'Disappointed' as Kyrgyzstan Ends 1993 Cooperation Treaty
Ardaev recalled that ultimately, it was "the US's overt concern with the 'development of democracy' and 'the protection of human rights'" that led to Bishkek's unilateral denunciation of its agreement with Washington, with Bishkek outraged over the State Department's decision to give a human rights award to a local activist charged with organizing ethnic clashes in the country.

"Kyrgyz authorities interpreted the US move as an expression of distrust toward the country's justice system," Ardaev explained. Denouncing the agreement, "the country chose to refuse to cooperate with the United States in building a democratic society, choosing instead the priority of economic development."

Devastated by civil war and economic collapse following the breakup of the Soviet Union, Kyrgyzstan now hopes to rise out of economic misery through the use of its own resources within the Eurasian Economic Union.