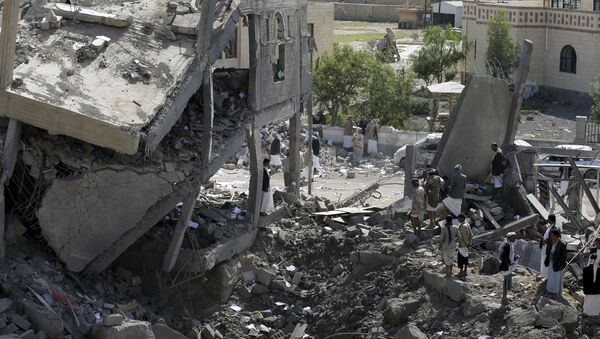 According to a military source, bombardment took place shortly after the Houthi political opposition faction seized a municipality in the Yemeni province.

Houthis Ready to Give Territories to Army, Not Riyadh Forces - Haqq Party
SANAA (Sputnik) — A coalition of Arab states led by Saudi Arabia carried out several airstrikes against Houthi targets in Lahij Governorate in southwestern Yemen on Thursday, a military source told Sputnik.

The bombardment took place shortly after the Houthi political opposition faction seized a municipality in the Yemeni province.

"The coalition’s aircraft launched a series of airstrikes against positions of the Houthis in the Kirsh municipality after Houthis and some army units [loyal to ex-president Ali Abdullah Saleh] fully regained control over it," the source said.

No casualties have been reported following the airstrikes.

Meanwhile, four Houthi militants have been killed in airstrikes in the central province of Marib, a local source told Sputnik earlier in the day.

Yemen is being torn by an armed conflict, with ethnic Houthi militias fighting troops loyal to President-in-exile Abd Rabbuh Mansur Hadi. In an attempt to counter Houthi advances, Hadi asked the Arab League for military aid, and a number of countries joined the Saudi coalition, launching airstrikes on Houthi positions.