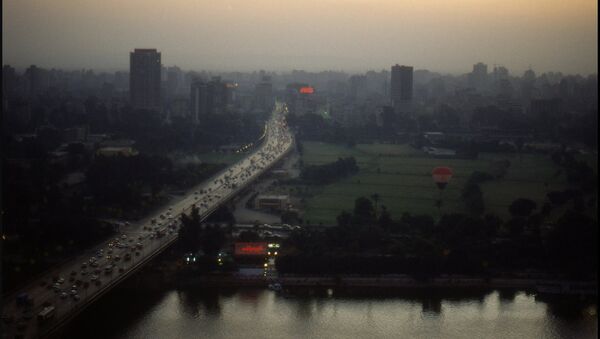 A large bomb blast injured at least 8 and damaged a state security building early on Thursday.

The incident reportedly took place in Shubra al-Khaima in northern suburbs of Cairo in the middle of the night.

At least eight people were injured, including six police officers, who have all been transferred to a hospital for treatment, local Al-Ahram daily reports, citing head of Egypt's ambulance authority Ahmed Ansary.

"A man suddenly stopped his car in front of the state security building, jumped out of it and fled on a motorbike that followed the car," the recent Interior Ministry statement said. "The car exploded wounding six policemen."

#Egypt | 6 wounded in an explosion in front of the state security building in Shubra al-Kheimah - State TV pic.twitter.com/LM67uE5Sfa

The four-story headquarters of the National Security Agency and surrounding buildings were severely damaged, according to eyewitnesses and reporters.

"The front glass window of my apartment broke and two doors fell down. It was like an earthquake," Hady Gad, a local resident of Shubra told AFP.

#Egypt's Min of Interior (via Facebook) says #Cairoblast caused by an explosion fr a car outside Natl Security Bldng https://t.co/AiMUyrUMGV

No deaths have been reported so far and nobody has claimed responsibility for the attack.

The Egyptian capital was recently hit by several explosions, including a car blast near the Italian consulate in July and a June bomb attack in Cairo’s Heliopolis region, which led to the death of Egyptian Prosecutor General Hisham Barakat.