From Russia With Sub? US in Fear of Russia’s Activity in the Atlantic 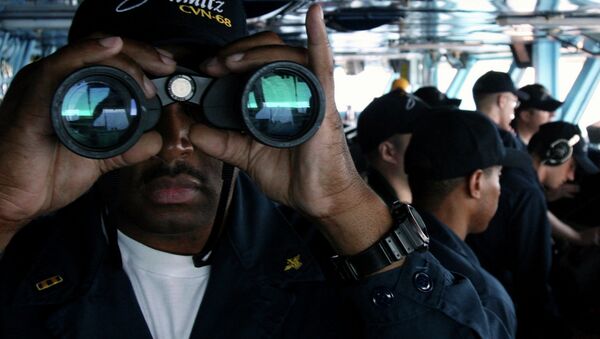 © AP Photo / Hasan Jamali
Subscribe
The US is ready to spend as much as $56.5 million on a so-called “sophisticated surveillance device” to be planted in the Atlantic Ocean, similar to the one it already uses in the Pacific; experts say the reason is that “the US military views Russian submarine activity in the Atlantic as both an immediate risk and an emerging long-term threat.”

The US Navy is seeking $56.5 million to upgrade its ability to detect submarines in fear of Russia’s activity in the Atlantic, according to a Bloomberg report.

Back to Africa: US Beating Drums Over Russia's New Geostrategic Pivot
The money is to be spent on a “sophisticated surveillance device,” towed by a ship, similar to the one already in use in the Pacific.

“As soon as mid-2016, the service also wants to send to the Atlantic a prototype networked undersea sensor system that addresses emergent real-world threats,” the agency quotes a Defense Department budget document as reading.

Both systems are intended to meet “an urgent requirement” sought by US combatant commanders responsible for Europe and homeland defense.

“The unclassified requests, still pending before Congress, provide a glimpse into mostly classified programs. They are the Navy’s equivalent of the Army’s well-publicized increase of troop rotations, exercises and equipment repositioning in the Baltics and other locations to reassure European allies,” Bloomberg says.

Russia’s New Maritime Doctrine As Response to US Hegemony – German Media
Interestingly enough, though the move is cited to be “in response to assertive naval moves by President Vladimir Putin,” the Navy’s requests are said to be submitted to Congress a month before Russia unveils “a new, more expansive maritime strategy.”

“The Navy’s proposals are evidence that the US military views Russian submarine activity in the Atlantic as both an immediate risk and an emerging long-term threat,” the agency quotes Tom Spahn, a Navy reservist who writes on undersea warfare issues, as saying.

“The prototype sensor network will be best used in a choke point like Gibraltar or a stretch of the North Atlantic from Greenland and Iceland to the UK where Soviet submarines transited during the Cold War,” Bloomberg quotes Bryan Clark, a naval analyst for the nonpartisan Center for Strategic and Budgetary Assessments, as saying.

Putin Descends Into Black Sea Depths
According to Russia’s new maritime strategy, announced by President Putin in July, the Arctic, the Atlantic and Crimea, as well as cooperation with China in the Pacific, are now among the most important interests of Russia.

Interesting it might seem, Bloomberg’s report comes on the same day when President Vladimir Putin took an opportunity to descend into the depths of the Black Sea in a submersible and survey the various wonders located on the sea floor, including an 11th century sunken ship.

000000
Popular comments
I thought Bloomberg was supposed to be a financial analysis enterprise. Has it become another Drudge Report?
jas
19 August 2015, 19:05 GMT
000000
I'm highly doubtful that the US is fearful of any Russian weapons systems. With the exception of nukes, Russia's conventional military is far inferior to the US which has been stated by NUMEROUS military experts. The only one who think otherwise is Russia itself which is reflected in virtually all of these articles..
Darryl4ever
20 August 2015, 21:31 GMT
000000
Newsfeed
0
New firstOld first
loader
LIVE
Заголовок открываемого материала
Access to the chat has been blocked for violating the rules . You will be able to participate again through:∞. If you do not agree with the blocking, please use the feedback form
The discussion is closed. You can participate in the discussion within 24 hours after the publication of the article.
To participate in the discussion
log in or register
loader
Chats
Заголовок открываемого материала
Worldwide
InternationalEnglishEnglishMundoEspañolSpanish
Europe
DeutschlandDeutschGermanFranceFrançaisFrenchΕλλάδαΕλληνικάGreekItaliaItalianoItalianČeská republikaČeštinaCzechPolskaPolskiPolishСрбиjаСрпскиSerbianLatvijaLatviešuLatvianLietuvaLietuviųLithuanianMoldovaMoldoveneascăMoldavianБеларусьБеларускiBelarusian
Transcaucasia
ԱրմենիաՀայերենArmenianАҧсныАҧсышәалаAbkhazХуссар ИрыстонИронауОssetianსაქართველოქართულიGeorgianAzərbaycanАzərbaycancaAzerbaijani
Middle East
Sputnik عربيArabicArabicTürkiyeTürkçeTurkishSputnik ایرانPersianPersianSputnik افغانستانDariDari
Central Asia
ҚазақстанҚазақ тіліKazakhКыргызстанКыргызчаKyrgyzOʻzbekistonЎзбекчаUzbekТоҷикистонТоҷикӣTajik
East & Southeast Asia
Việt NamTiếng ViệtVietnamese日本日本語Japanese中国中文Chinese
South America
BrasilPortuguêsPortuguese
NewsfeedBreaking
07:07 GMTSoyuz MS-20 Launches With Two Japanese Tourists to ISS From Baikonur
07:06 GMTEx-Pentagon Adviser: Putin-Biden Talks Unlikely to Ease Tensions Amid US Inability to Compromise
06:56 GMTIndian Oil Top Executive Not Ruling Out Decrease in Oil Demand Due to Spread of Omicron
06:51 GMTBattle Against Omicron Strain 'Probably Already Lost', Danish Professor Says
06:46 GMT'Untimely and Useless'? Israeli Tweeps Question Need for Fourth Covid Jab Amid Omicron Spread
06:21 GMTWest's Sanctions on Minsk Aim at Provoking New Wave of Anti-Government Protests, Moscow Says
06:08 GMTFirst Microscope Image of Omicron Variant Released
06:07 GMTArgentine President Feeling Good After Third Dose of Sputnik Vaccine, Russian Ambassador Says
06:00 GMTRussian Scientists to Improve Efficiency in Producing Essential Building Materials
05:59 GMTChina Blasts Morrison for 'Political Posturing' as Australia Joins US in Boycotting Beijing Olympics
05:53 GMTReaders Name Brazilian President Jair Bolsonaro Time Magazine's Person of the Year
05:51 GMT'We'll Be a Bomb Target': Danish NATO Radar Flusters Faroe Islands
05:48 GMT'Cheese, Wine, No Social Distancing': BoJo Staff Joked About Lockdown Christmas Bash in Leaked Video
05:13 GMTWreckage of UK Royal Airforce F-35 Fighter Jet Raised From Mediterranean Seabed
05:01 GMTArrival of F-35s at Civil Airport Sparks Noise Concerns in Norway
04:33 GMTHouse GOP Threaten 'Disastrous Consequences' if US Removes Troops Before DPRK Denuclearises - Report
03:29 GMTNot That They Were Expected in the First Place
03:21 GMTUS Senate Rejects Resolution to Block $650Mln in Arms Sales to Saudi Arabia
03:09 GMTCharlottesville to Move Statue of Gen. Lee to Museum to Be Melted Into New Monument
03:03 GMTUS House Passes $768Bln Defense Spending Bill, Sends to Senate for Vote