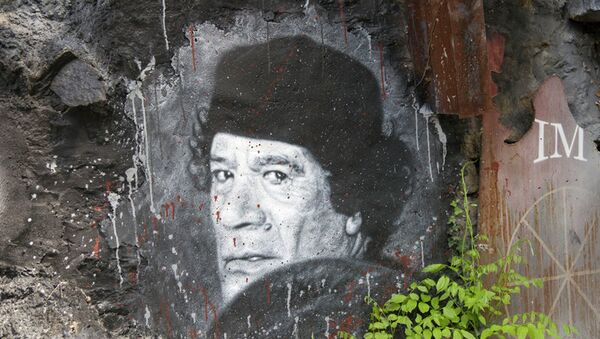 © Flickr / Thierry Ehrmann
Subscribe
The scale of the crisis in the Mediterranean can't be ignored. Two thousand migrants have died already this year on their journey to Europe. Fifty migrants remain unaccounted for after their rubber dinghy sank, this came just days after 200 migrants were presumed dead after their boat capsized off the coast of Libya.

The situation has been declared an 'emergency' by the United Nations as official data shows more than three times as many migrants arrived in the European Union last month than a year ago, the majority in Greece, where the number of migrants has soared by 750 percent.

"This humanitarian emergency is happening in Europe, and requires an urgent Greek and European response," says Vincent Cochetel, Director of the Bureau for Europe at the United Nations Refugee Agency.

The West, it seems, cannot ignore its legacy of military intervention in these countries when faced with the reality of the situation on the face of each migrant fleeing Syria and Libya and the sheer numbers arriving by boat every day.

Dr Ramzy Baroud, author, journalist and Middle East expert told Sputnik that Libya has dropped off the West's radar while the country has descended into chaos.

"It is particularly interesting that NATO went to war in early 2011, supposedly to save innocent Libyan lives in Benghazi, but cares so very little about the lives that were shattered and those who continue under the reign of the militants and their regional and international backers."

Baroud says NATO is perplexed when it comes to the next step and what to do with Libya, whilst viewing the migrant crisis as a security concern.

The ISIS advance in Sirte makes the NATO failure in Libya all the more damning. https://t.co/F9f0J9ZPM6

"Frankly for NATO, Libya only matters as a security concern, namely the flood of poor desperate refugees trying to cross the Mediterranean to Italy and other EU countries. In fact, Italy, which seemed hesitant at first to join the NATO war, but eventually did on April 28, is now keen on another war, to stave off the flow of war refugees.

"Western powers rarely worry about the outcomes of their military interventions, as long as the initial objectives are met."

Libya is now a failed state to the core and open to ISIS, Qaeda, and countless militias. Yet no war crimes for Gulf and NATO powers…

"The deliberate misinterpretation of the UNSC [United Nations Security Council] resolution 1973 achieved its goal of regime change in Libya. Muammar al-Gaddafi was a dictator, but that hardly compares to the devastation NATO's war left the country in."

"Unlike other pro-western Middle East dictators, Gaddafi seemed uncompromising to some extent, and unpredictable to be trusted as a permanent ally. Thus he had to be taken out."

Libya has become a failed state, operating like Somalia with a black market where humans have also become a commodity, fueling the smuggling of people to Europe. But Baroud points out that Libya wasn't always like this.

Libya had a functioning economy despite all of its problems. It had institutions, despite their endemic inefficiency. Women's rights were somewhat protected; racism was hardly rife, and people earned enough income, the highest in Africa — enough to live dignified lives.

However, Baroud is quick not to "sanctify the Gaddafi regime," adding that "he was corrupt and self-absorbed, and the country lacked real freedom and democracy.

"But it was still much better off than the state of bedlam and chaos without end, under-which it suffers.

"Libya is a failed state, without political center or horizon. It is ruled by utterly corrupt people, divided based on tribal affiliations and self-interests, and of course, the whims of regional and international benefactors, who are sustaining the various fiefdoms in that country."

Baroud told Sputnik that "…under such circumstances, a chaotic reality is emerging, where people are running away from the country, or, taking advantage of the security chaos and corruption, and using Libya as their gate to Europe, seeking better lives for themselves and their families."

In Libya they’re not treated like human beings… The smugglers call the migrants 'beasts'- Dr Anna from @MSF_SICILY pic.twitter.com/3kF0DawDIP

Almost 90 percent of the boats used by people smugglers to transport migrants across the Mediterranean set sail from Libya.

"Europe it taking little responsibility for these refugees, or the reasons why they are escaping across the sea;  wars in Libya, Mali and elsewhere in the Middle East have a lot to do with all of this, of course," says Baroud. 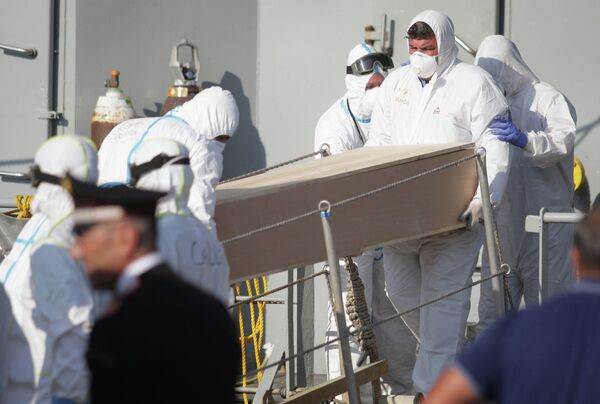 Rescuers carry a coffin off the Irish military vessel Naimh after its arrival in the port of Palermo on August 6, 2015, with 367 survivors aboard and 25 coffins, following a rescue operation at sea of a boat carrying over 600 migrants that capsized in the Mediterranean Sea off the Libyan coast.
© AFP 2021 / MARCELLO PATERNOSTRO

Recent peace talks in Geneva to stabilize Libya have failed to reach a resolution to the ongoing conflict; meanwhile Islamic State militants continue to gain more ground in coastal areas.

"The security chaos is allowing such notorious groups like ISI: to establish a foothold in parts of the country.

"Many Libyans are falling back into the comfort of tribal associations since they have no faith in their central government or rather governments," Baroud explains.

"This is undermining the Libyan sense of nationhood like never before."

The existence of such groups also complicate the situation, offering yet more opportunities for military intervention, as we have seen in the past few months when Egypt bombed parts of Libya, as did other Arab countries.

"So, sadly, the future of Libya is hardly promising," says Baroud.

#Libyans call for #indigenous #reconciliation process, do not trust #UN effort that attempts to justify #NATO #proxy #occupation of #Libya.

And the future for the thousands of migrants making their journey from Libya across the Mediterranean to Europe is one of life or death.