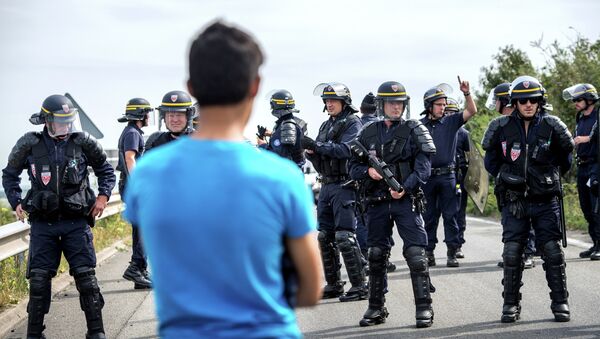 © AFP 2022 / PHILIPPE HUGUEN
Subscribe
The response by Britain to the crisis in Calais so far, is to spend millions on new fencing, patrols and CCTV. But France says it's not good enough, and is calling for a more humanitarian approach. Meanwhile, Britain blames France for making the situation worse - for a number of reasons - including striking French ferry workers.

But there's a backlash brewing on British social media on the inhumane response by the authorities. As more migrants are telling their stories, it seems fewer ministers are listening.

MT "@UK__News: Cartoon of the day: by Peter Brookes, The Times. pic.twitter.com/XN1qr2PDEF” #Calais

A proposed deal between British and French ministers is focused on improving security at the port and measures to deal with the people smugglers who helped them get there.

The French interior ministry said the UK home secretary Theresa May is meeting her French counterpart, Bernard Cazeneuve, in Calais where they will tour the Eurotunnel site. But critics say the ministers should visit the camp known as 'Jungle 2' or 'New Jungle' and talk to the migrants living there. 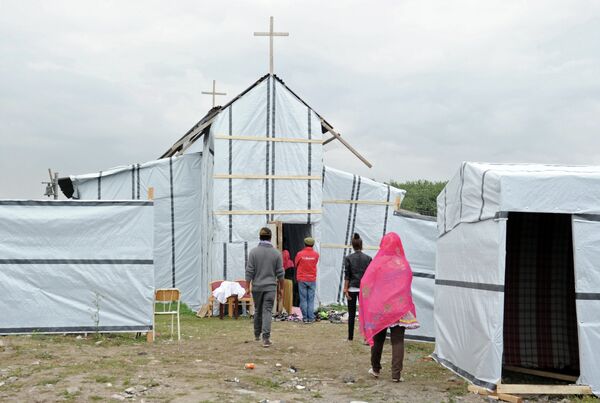 Migrants enter into the makeshift church built in the migrant camp called the 'new jungle' in Calais to attend a mass. Waiting for the perfect opportunity to cross over, many of the some 3,000 migrants in the Calais area stay in the 'New Jungle', a makeshift camp several kilometres from the city center.
© AFP 2022 / FRANCOIS LO PRESTI

Hundreds leave the camp each night under the shroud of darkness in an attempt to scale the security fence and reach the mouth of the Channel Tunnel. Nine people are believed to have died trying to make the journey while its estimated 2,000 attempts were made on two successive nights to break into the port terminal.

But earlier this month and at the height of the crisis, Britain pledged 10 million euros to secure the port of Calais.

It's thought the extra fencing, more search teams with sniffer dogs and CCTV cameras and floodlights brought in by Britain and France are beginning to have an effect on the numbers of migrants attempting to get across the border, falling to around 150 each night.

Thursday's meeting between France and Britain comes as the number of migrants arriving at the EU's border reaches a record high. EU border agency, Frontex said 107,000 migrants were being held at European borders last month.

Germany, which has seen a 70 percent surge in the number of Syrian refugees, is expected to receive 750,000 asylum seekers this year.

Following his meeting with Theresa May in Calais, Bernard Cazeneuve will travel to Berlin to meet the German interior minister Thomas de Maiziere to discuss Europe's migration policies.

Policies which appear to remain focused on border reinforcements, not humanitarian needs.