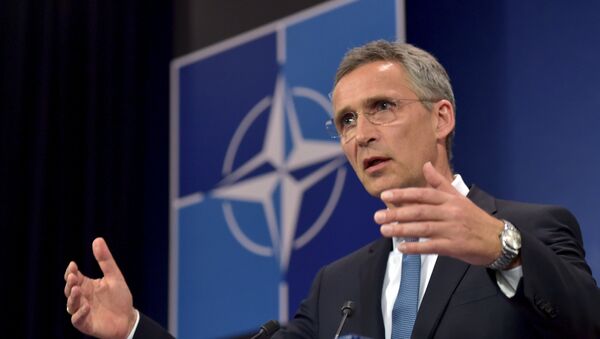 However, Russia would need to "respect the borders of its neighbors," NATO Secretary General said.

NATO Blasts Report Warning of Risk of War With Russia
WASHINGTON (Sputnik) — Shipments of heavy weaponry from the United States to Eastern Europe and the Baltics is not a provocative move nor is meant to provoke Russia, NATO Secretary General Jens Stoltenberg said during an interview published on Wednesday.

When asked whether the United States decision to send tanks, artillery and light-armored reconnaissance vehicles over the weekend to Europe was a provocative move, Stoltenberg responded "no."

"What we are now doing is that we are increasing our ability to reinforce our forces. I think that’s important," he stated during the interview with Vice News in Poland.

Stoltenberg argued there is never a "contradiction between a strong defense and dialogue," and emphasized that NATO does not "seek confrontation with Russia."

However, Russia would need to "respect the borders of its neighbors," he added.

Over the weekend, more than 160 US Marines arrived in Germany with heavy weaponry to be loaded on trains and moved across Europe in an effort to assure allies that NATO could move heavy equipment quickly throughout the region during crisis.

"We have decided to increase the readiness and preparedness of our forces so we are now implementing the biggest reinforcement to our collective defense since the end of the Cold War," Stoltenberg said.

US media reported that the latest rotation was set to be the first of three to be moved through Bulgaria as part of the European Reassurance Initiative announced in June.

Meanwhile, US Marines plan to train alongside Bulgarian, Romanian and Baltic state troops during their deployment.

NATO has increased its presence in Eastern Europe since Crimea's reunification with Russia in March 2014.

Russia has continuously warned that teh United States' and NATO's increased activities and amassing of weapons near its borders are provocative, and undermine regional and international stability.