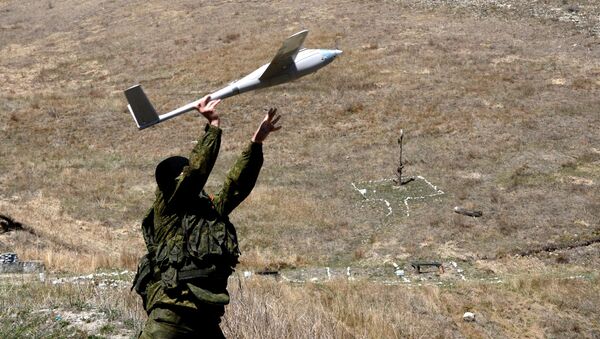 WASHINGTON (Sputnik) – On Monday, the Wall Street Journal reported that the Pentagon will conduct 50 percent more unmanned aerial surveillance missions per day in the next four years over actual or potential combat zones ranging from the South China Sea to Ukraine, Iraq, Syria and North Africa.

"I oppose any expansion of military drones, as both lethal and nonlethal surveillance drones all too often violate the sovereignty of nations."

Kinane warned such violations can lead to a variety of problems undermining the position of the United States.

"[M]ilitarized drones tend to undermine US national security by generating hatred toward the United States, by accelerating drone proliferation elsewhere, expanding areas of lethal conflict beyond where the US Congress has declared war, undermining accountability and undermining international law."

The US military has been increasingly reliant on drones to conduct operations in Afghanistan, Pakistan, Libya, Syria and Iraq. Critics have slammed the practice as being responsible for killing a significant number of civilians and destroying infrastructure unrelated to terrorists.

"Drone surveillance data is dubious and ambiguous, requiring a more than shallow understanding of the targeted culture. This is amply demonstrated by the high number of mistakenly killed victims and by the high number of times any highly-sought target is unsuccessfully drone-attacked before eventually being assassinated."

The US plan also envisages growing the capacity for lethal airstrikes by unmanned aircraft, according to the Wall Street Journal report.

Data collected by the Bureau of Investigative Journalism shows that US drone strikes have killed up to 1,000 civilians in Afghanistan, Pakistan, Somalia and Yemen over the past ten years.

The US drone program has remained a point of contention for international lawyers and human rights advocates since its inception.