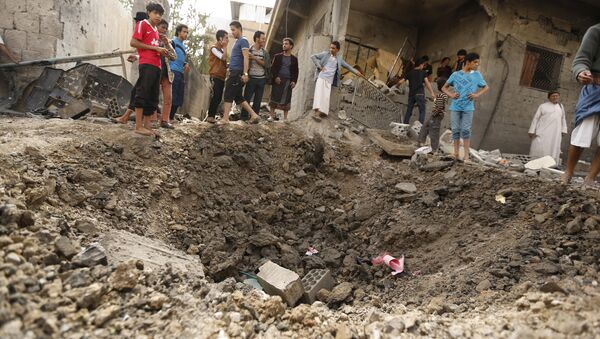 © REUTERS / Khaled Abdullah
Subscribe
An average of eight children are killed or maimed in the armed conflict in Yemen every day, UNICEF's said in a report.

NITED NATIONS (Sputnik) — The report added that at least 398 children were killed and 605 injured since the conflict escalated in March. About 10 million of Yemeni children were in strong need of humanitarian assistance and about 1.8 million were expected to suffer from malnutrition.

"Nearly 8 children killed or maimed every day in Yemen’s deadly conflict," the report "Yemen: Childhood Under Threat" published on the UNICEF website said on Tuesday.

Children ‘Bearing the Brunt’ of Conflict in Yemen

The conflict in Yemen is creating a humanitarian crisis that is putting children’s health and future in danger, UNICEF said in a report on Wednesday.

Children are "bearing the brunt of a brutal armed conflict" with no end in sight, UNICEF stated.

Yemen has long faced food and water security threats, but since 2014 an additional one million children are experiencing malnutrition as political instability and conflict rages across the country.

"As the conflict escalates, malnutrition — long endemic in Yemen — is posing an even more insidious threat to Yemen’s children. Overall, around 1.8 million children are likely to suffer from some form of malnutrition in Yemen in this year alone — a total increase of almost one million children from 2014," UNICEF said.

The UN agency added that more than half a million children already suffer from severe malnutrition in Yemen.

As social systems collapse in the country, UNICEF warned of severe and mounting health problems for children.

The conflict has claimed the lives of at least 1,900 civilians and has injured more than 4,000, according to the UN, while leaving 80 percent of Yemen in need of humanitarian assistance.