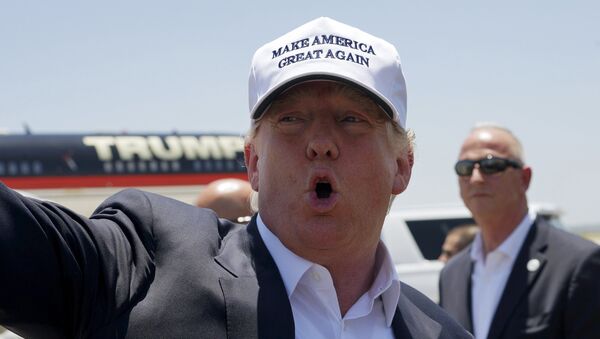 © REUTERS / Rick Wilking
Subscribe
Commenting on Donald Trump's skyrocketing poll numbers, unfazed by any number of loud scandals, Radio Sputnik contributor Brad Friedman suggested that Trump has 'cracked the code' on how to appeal to the base Republican voter, adding that Trump's run has effectively delegitimized the Republicans as a political party for 2016.

US Voters Say Trump Best Republican Candidate to Handle ISIL, Immigration
The columnist began this week's commentary on the presidential race by quoting Kevin Drum, who noted in a recent article for Mother Jones that the idea that the "surging" momentum of the Trump and Sanders candidacies are "fueled by people's anger with the status quo and the desire for authenticity in political leaders" was nonsense.

Drum wrote that "we hear this every four years," adding that "voters are always angry," and that they "always prize straight talk, and "are endlessly entranced by outsiders. And it's always [presented as] a surprising new phenomenon. Can we just stop it? This isn't new. It's an evergreen. But political reporters always believe it, and every four years at least a few of them take a tour of 'real' America and find exactly what they set out to find. People are fed up! And yet, every four years a fairly ordinary mainstream politician is eventually set to the White House anyway. Go figure."

Friedman argued that Drum's analysis was spot on, adding that it's "nonsense, especially when it comes to Donald Trump." The journalist suggested that Trump supporters "have been brainwashed, conned and duped" into supporting the likes of a Donald Trump, adding that Trump's surge in the polls is a confirmation that the Republican Party has turned into an "illegitimate" political party.

Furthermore, the media's failure to realize this is the reason "why the corporate media was so slow in understanding that Trump is not a phenomenon. He's not just going to go away. It's not a joke. He's running, he means it, and he has tapped into the Republican id of the last thirty years. He has cracked the code on how to run as a Republican."

Bernie Takes the Internet! More People Searching for Sanders Than Clinton
Friedman noted that "real conservatives, like Bruce Bartlett, a huge supply-side economics champion, who was a domestic policy for Ronald Reagan, and a Treasury official for George H.W. Bush [are] saying the same thing. If you're not going to listen to me, listen to him."

Last week on the Chris Hayes' All In, Bartlett, talking about Trump, said: "Oh I love Donald Trump, because he exposes everything about the Republican Party that I have frankly come to hate. It's just filled with people who are crazy, and stupid, and have absolutely no idea what they're talking about, and the candidates, no matter how intelligent they may be, just constantly have to keep pandering to this lowest common denominator in American politics, and Trump exposes that."

Bartlett also noted that "one of the things that we're seeing very clearly this time more than any other year is that the issues don't matter; policies don't matter. The only thing that matters is attitude, and Trump has exactly the right 'chip on your shoulder' attitude that many, many people find extraordinarily attractive, that is completely divorced from whatever he's saying about the issues, which is precious little."

Friedman suggested that Republican base voters "are not interested in policies." In the journalist's view, "they have no actual beliefs…They are not conservative. They are told by the Republican establishment that they are conservative, but they're not…They do not have evangelical beliefs.  If you don't believe that, look at the fact that in Iowa, which is supposed to be all about religious conservatives and evangelicals, Donald Trump is leading; he's got three wives, he's anything but a family values guy, and he's beloved in the state of Iowa as they head toward the caucuses there. They don't care about flip flops, they don't care about small government. They'll have the biggest government necessary if they believe that this is what the Republican Party wants them to believe."

Friedman noted that Trump's candidacy has helped "to point out that the Republican Party is a party without any actual governing philosophy other than 'we will do anything, we will say anything, we will disenfranchise anyone so that our team wins, period."

Donald Trump: Ukraine Crisis Is Problem of Europe, Not US
The radio journalist also believes that ultimately, the Trump phenomenon is "not good for Democrats. If Democrats are listening to this and celebrating that the Republican Party is no longer a legitimate party, I don't believe that is good for your party. I think that competition is good, the competition for ideas is good. A good legitimate debate is important, but that's now become non-existent, at least between the two parties…A legitimate Republican party would be very helpful, and the corporate mainstream media recognizing that the Republican Party is no longer legitimate –that too would be useful and perhaps hasten their return to reality. But no, the mainstream media treats the Republicans as they always have –as if they have not gone off the rails, as if they are not crazy, and this allows a guy like Trump to come in and take over this party."
000000
Newsfeed
0
New firstOld first
loader
LIVE
Заголовок открываемого материала
Access to the chat has been blocked for violating the rules . You will be able to participate again through:∞. If you do not agree with the blocking, please use the feedback form
The discussion is closed. You can participate in the discussion within 24 hours after the publication of the article.
To participate in the discussion
log in or register
loader
Chats
Заголовок открываемого материала
Worldwide
InternationalEnglishEnglishMundoEspañolSpanish
Europe
DeutschlandDeutschGermanFranceFrançaisFrenchΕλλάδαΕλληνικάGreekItaliaItalianoItalianČeská republikaČeštinaCzechPolskaPolskiPolishСрбиjаСрпскиSerbianLatvijaLatviešuLatvianLietuvaLietuviųLithuanianMoldovaMoldoveneascăMoldavianБеларусьБеларускiBelarusian
Transcaucasia
ԱրմենիաՀայերենArmenianАҧсныАҧсышәалаAbkhazХуссар ИрыстонИронауОssetianსაქართველოქართულიGeorgianAzərbaycanАzərbaycancaAzerbaijani
Middle East
Sputnik عربيArabicArabicTürkiyeTürkçeTurkishSputnik ایرانPersianPersianSputnik افغانستانDariDari
Central Asia
ҚазақстанҚазақ тіліKazakhКыргызстанКыргызчаKyrgyzOʻzbekistonЎзбекчаUzbekТоҷикистонТоҷикӣTajik
East & Southeast Asia
Việt NamTiếng ViệtVietnamese日本日本語Japanese俄罗斯卫星通讯社中文（简体）Chinese (simplified)俄罗斯卫星通讯社中文（繁体）Chinese (traditional)
South America
BrasilPortuguêsPortuguese
NewsfeedBreaking
06:00 GMTDanish IT Giant Under Investigation for Alleged Illegal Supplies to UAE Despite Export Ban
05:51 GMTTrudeau Says Canadians Sending Liberals Back to Work With Clear Mandate
05:38 GMTPrince Andrew’s Lawyer Reportedly Served With Sexual Assault Suit Papers
04:36 GMTCanadian Opposition Conservatives Leader Concedes Defeat in Election
04:26 GMTLive Updates: India Reports 26,115 New COVID-19 Cases
04:25 GMTCanada’s Liberals Lead in 157 Districts With 70% of Polls Reporting, Elections Commission Says
03:50 GMTGuterres Urges US, China to Rebuild Their Relationship to Avoid New Cold War - Report
03:42 GMTPhoto: Bolsonaro Forced to Eat Pizza on NYC Sidewalk Because He Is Not Vaccinated
03:31 GMTCanada's Liberals to Win Most Seats in 2021 Federal Election, Projections Claim
03:15 GMTUnited Russia Party Wins State Duma Elections With 49.82% of Votes
02:55 GMT911 Call Reveals Boyfriend Was Seen 'Slapping' Petito Two Weeks Before Her Disappearance - Report
02:31 GMTBiden Reaffirms Strong US-UN Partnership at Meeting With Guterres
02:22 GMTIndia Cuts Off Communications, Internet in Kashmir Due to Terrorists, Reports Say
02:12 GMTMember of CIA Chief’s Team Affected by ‘Havana Syndrome’ During Work Trip to India, Report Says
01:22 GMTClimate Change-Driven Cyclones Could be Regular Sights in Europe in 30-50 Years, Meteorologist Warns
01:02 GMT‘License to Murder Children?’ Psaki Panned for Bringing Up Biden’s Losses in Kabul Strike Answer
00:38 GMTMilley Told Admiral to Halt Operations in Pacific That China Could Deem 'Provocative', Authors Claim
00:11 GMTPremier League Goals of the Weekend
YesterdayMali Looks for ‘Plan B’ to ‘Bolster Our National Defense’ As French Mission Exits, Leaving Chaos
YesterdayGlobal Pandemic Caused Significant Surge in Demand For Black Bridal Dressers, Fashion Experts Say