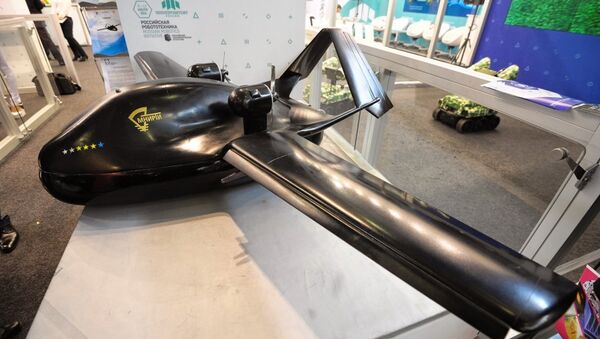 © Photo : United Instrument Manufacturing Corporation
Subscribe
The new Chirok multirole UAV will be capable of takeoff in almost any conditions and is suited for both civilian and military uses, a spokesman from the drone's developers told Sputnik Serbia.

The Chirok ("Teal," a type of duck) multirole hovercraft unmanned aerial vehicle (UAV) is a unique development with no known analogues in Russia or around the world, Rostec spokesman Leonid Khozin told Sputnik Serbia.

The UAV, which also has a piloted variant, is unique in the world because of its air-cushioned chassis, according to Khozin. It will be presented at the MAKS-2015 air show, which begins in suburban Moscow on August 25.

"Rather than a wheel base, it has a hovercraft air-cushion, which allows the UAV to ascend into the air without a traditional landing strip or a catapult, to take off from practically any surface. This can be sand, loose ground, it can be a swamp, it can be rugged terrain with potholes, mounds or other obstacles," Khozin told Sputnik Serbia.

Meet Chirok: Russia's Unique Hybrid Amphibious Drone
The drone is made out of composite materials which make it hard to detect the aircraft, together with a reciprocating engine and controllable-pitch propellers which significantly decrease its noise levels, according to its manufacturer, the United Instrument Manufacturing Corporation (UIMC).

"Civilian use could be from geologists, for example oil-extracting companies, for monitoring and inspection of the infrastructure. That is, inspection of overpasses, oil pipelines, electric grids, all the traditional UAV uses. It could be used for delivery of freight to distant locales where there are no normal roads," Khozin added.

The military could fit it with missiles, rockets or bombs to use as a combat vehicle. The Chirok's wingspan is 10 meters and its take-off mass is 650 kilograms. It is also capable of carrying an additional 300 kilograms of freight.

"Last year at Innoprom, a large exposition in Yekaterinburg, we presented a 1:5 scale model. The model was not functional, that is the engines worked but that was about it. We will now present the full-size Chirok at the MAKS [air show]," Khozin told Sputnik Serbia.

Russia's 'Secret Weapon of War' Holds the Key to Armata's Future
The project, then in the form of a plane rather than a UAV, was developed by the Pegas design bureau with prototypes presented as early as 1994, according to the RIA Novosti photo archive. The last mention of it from the design bureau came in December 1999, when Pegas said that it would not be developing the prototype further, following Russia's 1998 financial crisis. The project received a new life following investments from the Rostec corporation.

"Today we have thirteen applications from various foreign countries and delegations which with to come see and talk to our specialists, the developers of this UAV. These are countries of Western and Eastern Europe as well as Asia," Khozin added.