Earth's Doppelganger May Have Vast Oceans 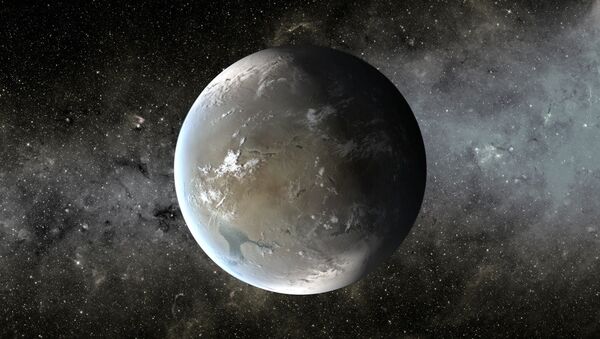 © NASA
Subscribe
A small, rocky planet that has a diameter 40% larger than that of Earth could host oceans of water as long as it also has a carbon-dioxide atmosphere that keeps the planet warm, researchers say.

"A high carbon-dioxide atmosphere is a reliable way to put liquid water on this planet," Aomawa Shields, a scientist at UCLA, who was involved in the new research of the planet, dubbed by scientists as Kepler-62f.

Kepler-62 is a small, dim star two-thirds the size of the sun and only one-fifth as bright.

Five planets orbit the star, which lies 1,200 light-years from the sun in the constellation Lyra. Only two of these planets – Kepler-62e and Kepler-62f – lie in the habitable zone, the region around a star in which liquid water could lie on the surface of a planet, space.com reported.

Kepler-62e is likely too hot for liquid water, Shields said.

Kepler-62f, however, lies farther from its sun. Scientists concluded it is likely either a rocky planet or one that hosted solid water, rather than a gas giant, space.com reported.

Shields put the planet into a pair of simulations, both of which resulted in the freezing of surface water, creating an icy snowball planet. However, a third simulation, one with a tipped orbit, showed temperatures at the southern pole rose above freezing during the hemisphere's summer months.

"At its southern hemisphere summer, [Kepler-62f] gets more of the max effects," Shields said. "This could result in melting ice sheets."

"It could sustain surface liquid water if the atmosphere had greenhouse gases," Shields said.

Additionally, periodic melting could allow the atmosphere, ocean and some of the radiation from the star to mix – a combination believed to aide in the development of life.