Surprise! US Has Zero Grain Reserves Since 2008 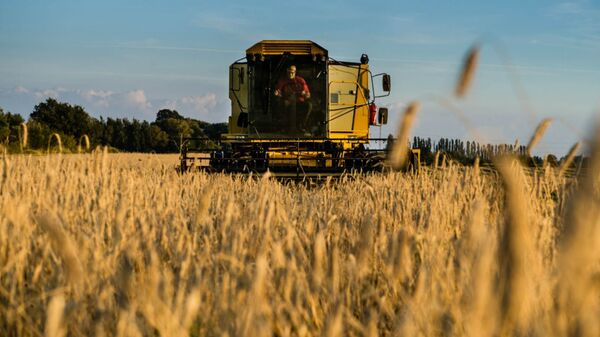 CC BY 2.0 / Bo Nielsen /
Subscribe
International
India
Africa
The drought in the American West is causing devastating consequences on US agriculture. With grain prices climbing steadily, some have proposed the reestablishment of a Strategic Grain Reserve to control costs, a program which was phased out entirely seven years ago.

Driving across any highway through the American heartland, you’re sure to see the horizon dotted by tall grain silos. Whether the classic, wooden variety which wouldn’t look out of place in an Edward Hopper painting, or the more modern, metallic version, the structures serve an important purpose. Silos preserve the excess harvest from earlier seasons to be used during more trying times in the future.

With the California drought potentially entering a fifth year, it may be beneficial to consider the concept on a more national scale, according to Frederick Kaufman’s article for the LA Times.

Kaufman compares the idea to the Strategic Oil Reserve, the vast stockpile maintained by the US government. The utility of that supply is twofold. For one, it provides a safety net in the event of an emergency. If, for any reason, fuel supplies are temporarily cut off, the Strategic Oil Reserve retains enough crude to supply the country for an estimated 58-day period.

The stockpile can also serve as a way to ensure market stability. If gas prices climb too high, the government can release oil from its own reserve, thereby increasing supply, reducing demand, and preventing inflation.

A national grain reserve could perform similar functions for the agriculture industry. In addition to being able to stabilize shaky grain markets during times of environmental disasters – an increasingly likely scenario given global warming trends – a grain reserve could also turn the government into a major customer.

With grain in short supply, the reserve would distribute its stockpile, and then help struggling farmers get back on their feet by purchasing the grain necessary to refill the reserve.

The fact that the United States doesn’t already have such a system in place is especially surprising given that, once upon a time, it did. President Franklin D. Roosevelt established just such a reserve to rescue farmers during the Great Depression. But the focus on capitalism during the second half of the century led to the 1996 Freedom of Farm Act, a bill essentially meant to keep big government out of agriculture.

An especially baffling decision given the billions spent each year on farm subsidies.

Once passed, US grain reserves were allowed to dwindle, until what little remained was converted into a dollar amount in 2008.

While Washington is no longer in the grain storage business, the private sector is. As Kaufman points out, agriculture corporations can’t afford not to stock up on reserves. In the event of a less-than-ideal harvest, that backup could prove critical for profit margins.

Should a climatological disaster occur, those corporate stockpiles will be there, but companies will have no incentive to provide grain to those in need. With demand high, stored grain will be sold, and excess will be withheld for future gains.

Will global warming, such disasters could be on the horizon.

"In the last five years two devastating run-ups in the price of food have pushed the number of hungry people on the planet to a billion and the number of 'food insecure' households in the United States to 17 million," Kaufman writes.

"Despite the weather, the weevils, the mandates and the speculators, there is a way to blunt the ravages of drought and market greed," he adds. "Bad weather need not guarantee food inflation. The sure path to national food security is a national grain reserve."