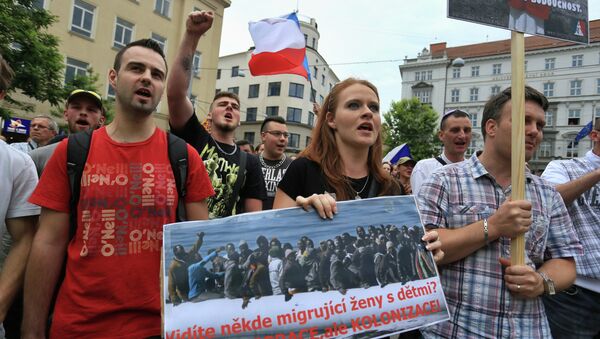 MOSCOW (Sputnik), Daria Chernyshova — On Wednesday, Czech media reported, citing sources in the Defense Ministry, that the army was ready to send up to 2,600 soldiers to increase border patrols intended to counter a large-scale influx of refugees.

"The idea to protect the Czech border with army forces (possibly up to 2,600 soldiers) is based on weaknesses of the Schengen border practice. The recent immigrants crisis will lead to the reforms of Schengen area system," Miloslav Ransdorf said.

Use of Czech Army to Contain Migrant Influx Escalates Border Situation
Ransdorf underscored that financing for Frontex, the EU external border protection agency, must be increased.

According to the politician, not only Italy and Greece but other states including Spain and Hungary are suffering due to a massive influx of refugees.

Thousands of refugees make the mistake of traveling to the European Union due to incorrect social and economic information about the bloc, Ransdorf continued on to say in an interview with Sputnik.

In May, the European Commission proposed a quota system for EU member states to evenly redistribute refugees throughout the bloc based on social and economic indicators for each member state. The Czech Republic, along with several other European nations, rejected the quota system, agreeing instead to a voluntary system.

"The immigrants are coming to the EU on the basis of falsified and incorrect information. Many assume they will be given a private house in the EU countries, etc. They have no real information about the situation in European countries," Miloslav Ransdorf said.

Ransdorf underscored that "no quotas can help taking into account that 100 million people are interested to move to Europe.”

Growing Migrant Crisis Direct Result of EU, NATO Policies – Latvian Party
The politician suggested that the recent wave of refugees threatens the standard of living of EU citizens and that immigration legislation reform is urgently needed.

The hotly-debated European Union refugee crisis was triggered over the past year by an increasingly heavy flow of asylum seekers fleeing conflict-torn countries in North Africa, the Middle East, Central and South Asia.

Nearly 250,000 migrants arrived in Europe by sea in 2015 alone, according to UN estimates.