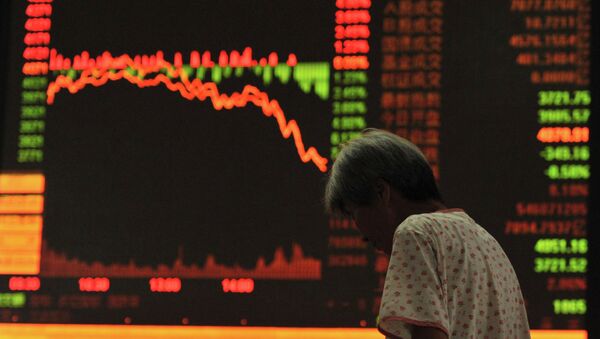 Anxiety is spreading across the emerging nations, both in the Asia-Pacific region and beyond, as mainland China’s currency devaluation triggers an escalation in the global war of currencies, while the scope of competitiveness for the developing nations narrows.

Kristian Rouz – Last week’s sudden devaluation of mainland China’s currency, the renminbi, turned out to be a greater shock to most Asia-Pacific economies than previously suggested.

Not only did the renminbi’s devaluation push several Asian nations to further weaken their currencies in an attempt to maintain the competitiveness of their exports, but Beijing’s move also provoked dramatic selloffs in currencies and commodities alike, sending prices lower and hurting the broader economies of several countries.

Blessing in Disguise: Yuan Devaluation Helps China's Competitiveness in US
As nations struggle for export revenues amidst the global oversupply of raw materials, their economies are showing signs similar to those last witnessed in the 1998 Asian crisis.

On Monday, the MSCI Emerging Markets Index dropped 1.1%, now at its lowest since October 2011. Capital flight from mainland China intensified, with foreign investors rushing their money through Hong Kong Stock Connect scheme, buying into safer assets in the developed nations. An index of 20 emerging nations’ exchange rate dropped to its all-time lowest, meaning the ‘exchange rate war’, the ugly incarnation of the global struggle for competitiveness, is now taking its toll on hundreds of millions of consumers across the developing world.

The Malaysian ringgit sank the most among the emerging markets’ currencies in its sharpest decline since 1998. Last week, the ringgit lost 3.8% of its value against the US dollar after its central bank announced their decision to buy hard currencies to refill the nation’s FX reserves.

Malaysia’s reserves dropped below $100 bln for the first time since 2010, and while the nation’s regulator rebuffed other measures like a currency peg or the introduction of capital control to refill FX reserves, the devaluation became the only option, clearly. Investors fled Malaysia and a broader market reaction was feverish: the Asian crisis of 1998 also started with a series of dramatic devaluations across Asia-Pacific.

During the past 12 months, the ringgit declined 23%, with political implications, the renminbi devaluation, the appreciating US dollar and the oil slump all being factors of the decline. A year prior to the onset of the crisis in 1998, the ringgit dropped 30%. The ringgit is now at its cheapest since August 1998.

Adding to the Malaysian concern, the Republic of China also dropped 0.9% against the dollar on Monday.

Emerging currencies have now declined for the eighth consecutive week, their longest decline since 2000. Among other currencies affected are the Turkish lira, down 0.6% to its all-time lowest against the dollar at 2.8495. Turkey is also affected by domestic policy implications, as the nation has repeatedly failed to form a coalition government over the last two months.

In Brazil, the real shed 0.6%. The widespread anxiety and public dissatisfaction with President Rousseff and the government’s economic policies triggered massive street protests yesterday. Corruption and poverty have enraged the Brazilians to the point where they demand Rousseff’s impeachment and a resignation of the entire cabinet.

What Does Yuan Devaluation Mean for Chinese Cooperation With Russia?
In Hong Kong, the Hang Seng Index dropped 0.7% during the aftershocks of the renminbi’s devaluation as well. The gauge is at its lowest since July 8. The general concern is that the mainland’s currency might be allowed to depreciate further. The manufacturing decline in the mainland is attributed to the loss of export competitiveness, a curse the mainland’s government is attempting to overcome by all means necessary.

Market participants are expecting a full 5% devaluation of the renminbi, sending spillovers across all export-reliant emerging markets.

While the developing nations of Asia-Pacific are sinking, the more developed Japan, Australia and New Zealand all gained on Monday as investors rushed for safer assets. Japan’s Nikkei 225 Index rose 0.5%, while the broader Topix rose 0.5% as well, even though Japan is suffering from an economic contraction.