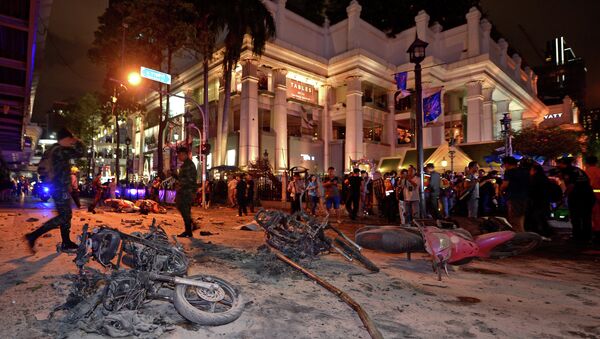 At least 27 people, including 8 foreigners have been killed and 80 injured in a major blast in Thailand's capital Bangkok, local broadcaster reported. Most of those injured are Chinese tourists. However, the country's internal ministry's officials said that 18 people died and 117 sustained injuries.

Earlier police have confirmed 12 people had been killed and dozens sustained injuries in the blast.

According to bangkokbiznews.com, several cars were set ablaze by the blast, which took place near the Erawan Shrine in the city center, a popular tourist attraction.

PHOTOS: EOD are now on scene of explosion near Erawan Shrine at Ratchaprasong in Central #Bangkok — @RichardBarrow pic.twitter.com/GlnF29hNTq

Body parts were scattered across the street after the bomb went off, local residents report.

7:22pm Reports of a death are unverified. Nor do we know source of explosion — RT @BOICE_ELF: pic.twitter.com/HDE7XSqLLr #Bangkok

Police said a bomb squad was attempting to deactivate two unexploded bombs that had been found at the site.

Thailand's Defense Minister Prawit Wongsuwong said that the terrorist attack had been aimed at foreigners to damage the country's tourism.

All 438 schools under the Bangkok Metropolitan Administration will be closed on Tuesday due to security concerns, government said.