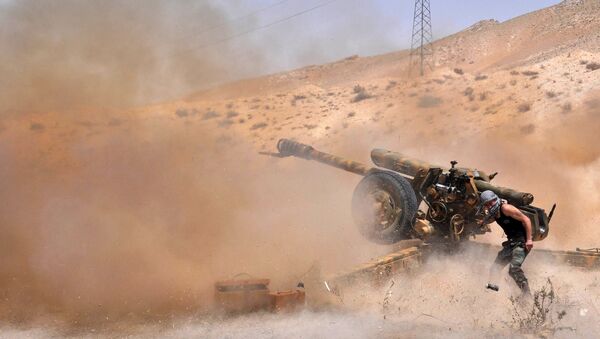 © AFP 2021 / STR
Subscribe
The Syrian army and the Lebanese movement Hezbollah are fighting insurgents in the town of Zabadani, near Damascus, after a ceasefire was broken, a military source said Monday.

Syrian Army Kills 50 Al-Nusra Front Terrorists, Mostly Foreign Mercenaries
BEIRUT (Sputnik) – On August 11, a two-day ceasefire had been declared between the Syrian army and insurgents in Zabadani near the Lebanese border, and came into force on Wednesday.

Later, the ceasefire was prolonged until Sunday. On Saturday, Nusra Front and Ahrar al-Sham militants resumed military operations in Zabadani.

"In the result of hostilities, the army captured a building where an explosives plant is located, a warehouse with 1,500 mortar bombs and some about 10 artillery cannons… Our artillery from the south tackled terrorists’ positions in the west of Zabadani," the source told RIA Novosti.

Syrian government forces are fighting insurgents and radical Islamists, including the Nusra Front and Islamic State, amid a civil war that began in 2011.