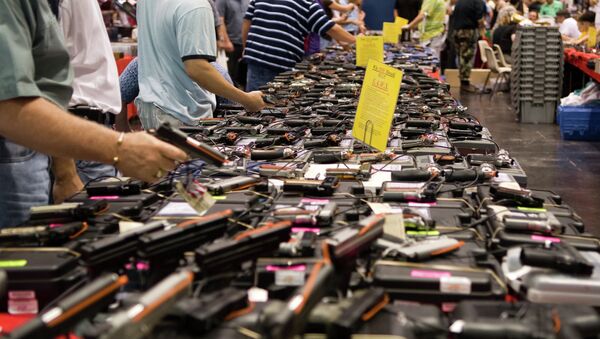 A new study suggests that police officers are three times more likely to die in the line of duty in states with the highest rates of registered gun ownership as opposed to states with the lowest rates.

Reverend Denounces US ‘Love Affair’ With Guns
The study published in the American Journal of Public Health indicated that states such as Montana, Arkansas and Alabama share the highest rates of registered gun ownership as well as police deaths by homicide; meanwhile, states such as New York, New Jersey and Massachusetts share the lowest rates for both instances.

The researchers gathered these findings by studying the 782 police officer deaths from 1996 to 2010, as well as information collected by the FBI and the Centers for Disease Control.

The research paper’s writers claim most of these officers’ deaths involve gun fire.

8 Facts You Should Know About Guns and Mass Shootings in US
“We know that 92 percent of police officers killed in the line of duty are killed by guns, three-quarters of which are handguns,” said David Swedler, lead researcher and an assistant professor of environmental and occupational health sciences at the University of Illinois at Chicago.

Swedler said these statistics could be influenced by officers facing high risks of fire fights when responding to calls of domestic violence disputes involving homes where guns are kept.