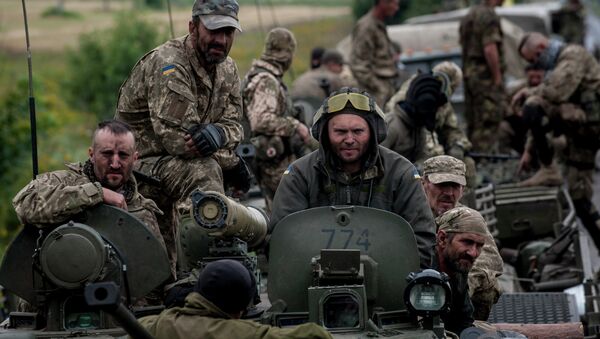 Donbass is at the threshold of renewal of full-scale warfare, as Kiev violates every single term of the Minsk ceasefire protocol on daily basis, bombing both residential and public areas on the east of Ukraine, says American journalist Stephen Lendman.

DPR to Raise Minsk Agreements Violation Issue at Contact Group Meeting
Special troops from the US and the UK are actively preparing Ukrainian forces for the escalation of conflict in the Donbass region, Lendman wrote in his column.

Eduard Basurin, the spokesperson for the self-proclaimed Donetsk People’s Republic, said that the Ukrainian military had attacked the territory of DPR, using tanks and heavy armament in violation of Minsk agreements on August 10.

“They knew that we had lived up to our commitment to withdraw all heavy weapons, including with a caliber under 100mm (from the disengagement line), and decided to take advantage of the situation to move deep into the DPR’s territory,” Basurin said as quoted by CounterPunch.

The ceasefire agreement has never been observed since its establishment in February and “dozens of shellings” occur in Donbass every day, Lendman said, citing LPR’s special envoy Vladislav Deinego.

US Sliding Into Vietnam-Style War in Ukraine – Stephen Cohen
According to Deinego, peace was never an aim for Kiev as well. Despite the collapse of Ukraine’s economy, state authorities reserved another $250 million for expanding military might in Donbass. And at the same time the country badly lacks money for “constructive purposes,” Lendman added.

Meanwhile, British Defence Secretary Michael Fallon announced the UK would train twice as many soldiers for Ukraine’s army by the end of 2015. So far, UK coaches prepared over a thousand Ukrainian troops for active warfare.

With help from the US and the UK in preparing the Ukraine’s military forces, Kiev may start full-scale aggression any day now, Lendman concluded.