Ukraine Has No Money to Shut Out Russia With Border 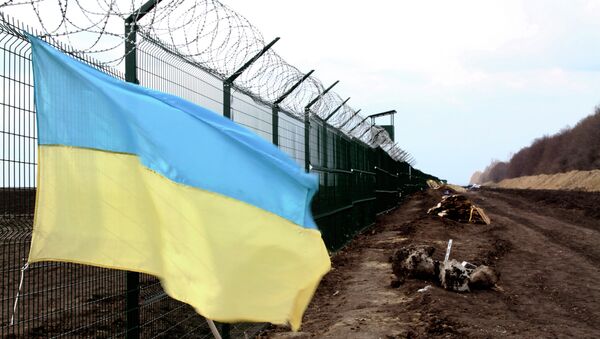 © AP Photo / Inna Varenytsia
Subscribe
International
India
Africa
More than a year after Kiev launched an ambitious project to seal up Ukraine's 2,000-kilometer border with Russia only a small fraction of the $250-million project that Kiev hopes could help withstand an imaginary Russian invasion has been built.

The Great Ukrainian Wall: Profanity the West Paid For
Just as Prime Minister Arseniy Yatsenyuk urges the border officials to speed up work on what he calls the European Rampart project, many analysts doubt whether Ukraine will be able to see the project through.

"In the short term, this project will be difficult to implement primarily for economic reasons," said Volodymyr Fesenko of Kiev's Penta think-tank.

"It needs huge amounts of money that right now Ukraine doesn't have," he added.

Intended as a highly sophisticated system, combining defense measures with modern electronic surveillance tools, the European Rampart is scheduled to be completed by 2018.

Ukraine began work on the barrier in September last year but the project has been held up by its enormous cost to the cash-strapped state.
Initially estimated at $1 billion, Kiev was forced to slash the budget for the border fence by 75 percent.

Bureaucratic problems common in post-Soviet Ukraine — in this instance about which state body should oversee the work — have added to the setbacks, with the border service eventually put in charge.