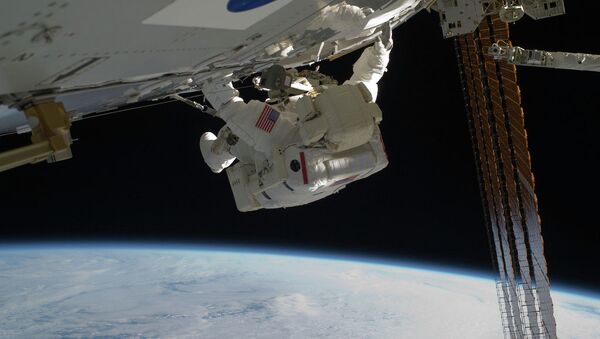 © NASA .
Subscribe
A team of experts at the Russian Academy of Sciences’ Space Research Institute are working on the prototype of a robot cosmonaut to help ISS crews during spacewalks.

US, Russia, China to Explore Benefits of Outer Space for ASEAN
Russia is a world leader where it comes to designing all kinds of space innovations. Including the Dynamic Albedo of Neutrons (DAN) instrument  mounted on the Mars Science Laboratory’s Curiosity rover.

It is a pulsed sealed-tube neutron source and detector used to measure hydrogen or ice and water at or near the Martian surface.

The Americans spent around $2 billion on their 2011 mission to the Red Planet, and they made ample use of Russian innovations to make the whole project happening.

The study of the chemical composition of the Martian surface is a key item of the planet’s exploration, especially including the search for water.

Since 2001 this study has been performed by the Gamma Ray Spectrometer (GRS), which includes DAN’s predecessor — the Russian-made High Energy Neutron Detector (HEND) for detection of high-energy neutrons.

Russian-designed space exploration instruments are widely used by NASA in its study of the Moon and its glaciers.

As a Russian crew is now preparing for a planned landing on the lunar surface in 2018, scientists are certain that by using  their instruments the cosmonauts will make a wealth of discoveries to facilitate Man’s exploration of the Universe for years to come.