'I Like Vladimir': Russia's Special Place in the Heart of Balkan Nations 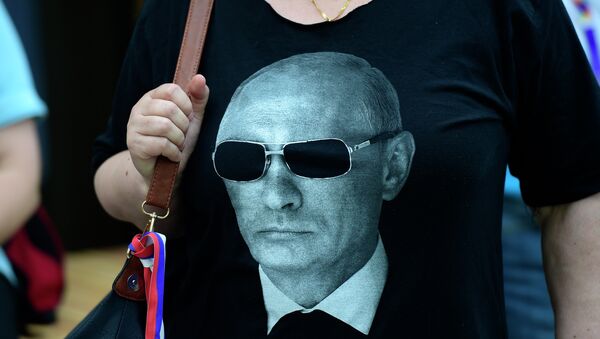 © AFP 2022 / OLIVIER MORIN
Subscribe
The Balkan countries, according to Handelsblatt, treat Russia as a global power and are (understandably) wary of the European Union that failed to deliver on its promises given after the end of the Cold War.

On the streets of Sarajevo, the capital of Bosnia and Herzegovina, young people sport t-shirts emblazoned with the image of Russian leader. "I like Vladimir," one of them named Darijo Marakovic told the German newspaper. "Putin always gets what he wants. … To an extent he is our god," he noted adding that the Russian president is the only hope for the Balkans.

Best t-shirt I saw in Belgrade has tough looking Putin wearing sunglasses, and it says "Kosovo is Serbia. Crimea is Russia":)

Missing Link? Serbia Can Forge "Bridge" Between Russia, Europe
It is not about T-shirts or hoodies in Serbia – in the neighboring country banners are all the rage. Billboards praising Russia as a big Slavic brother and Putin as a "model Slav" adorn streets of Serbia's key city of Belgrade, Handelsblatt pointed out.

A recent poll conducted by the Politika newspaper showed that over 61 percent of Serbs want their government to strengthen ties with Russia, the German business publication reported. Many locals pin their hopes on Russia as the only country which can help them and they have grounds to think this way.

Last year, Moscow was swift in providing assistance to Serbia, as well as Bosnia and Herzegovina hit by devastating floods said to be the worst in over a century.

"Dozens were killed; hundreds of those who lost the roof over their heads were waiting for help. When Brussels was discussing what steps should be taken, Russia offered real assistance by sending helicopters, equipment to clear debris, medical aid and rescue workers," the German newspaper wrote, citing a 73-year-old Serbian selling vegetables in Belgrade.

During his brief visit to Belgrade last year, the Russian president was greeted with cheers and chants "Putin, Putin." Serbian President Tomislav Nikolic called Russia a "big ally" of his nation. "Serbia will not jeopardize its moral principles due to some negative attitudes towards Russia," he added. 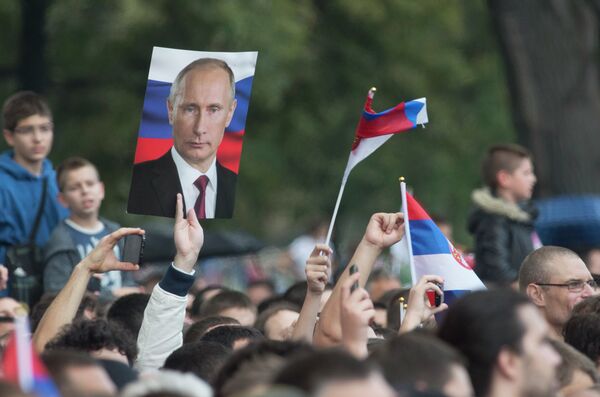 Residents of Belgrade with pictures of Vladimir Putin and Russian flags during Russian president's visit to Serbia on October 16, 2014.
© Sputnik / Sergei Guneev
/
Go to the photo bank
Newsfeed
0
New firstOld first
loader
LIVE
Заголовок открываемого материала
Access to the chat has been blocked for violating the rules . You will be able to participate again through:∞. If you do not agree with the blocking, please use the feedback form
The discussion is closed. You can participate in the discussion within 24 hours after the publication of the article.
To participate in the discussion
log in or register
loader
Chats
Заголовок открываемого материала
Worldwide
InternationalEnglishEnglishMundoEspañolSpanish
Europe
DeutschlandDeutschGermanFranceFrançaisFrenchΕλλάδαΕλληνικάGreekItaliaItalianoItalianČeská republikaČeštinaCzechPolskaPolskiPolishСрбиjаСрпскиSerbianLatvijaLatviešuLatvianLietuvaLietuviųLithuanianMoldovaMoldoveneascăMoldavianБеларусьБеларускiBelarusian
Transcaucasia
ԱրմենիաՀայերենArmenianАҧсныАҧсышәалаAbkhazХуссар ИрыстонИронауОssetianსაქართველოქართულიGeorgianAzərbaycanАzərbaycancaAzerbaijani
Middle East
Sputnik عربيArabicArabicTürkiyeTürkçeTurkishSputnik ایرانPersianPersianSputnik افغانستانDariDari
Central Asia
ҚазақстанҚазақ тіліKazakhКыргызстанКыргызчаKyrgyzOʻzbekistonЎзбекчаUzbekТоҷикистонТоҷикӣTajik
East & Southeast Asia
Việt NamTiếng ViệtVietnamese日本日本語Japanese中国中文Chinese
South America
BrasilPortuguêsPortuguese