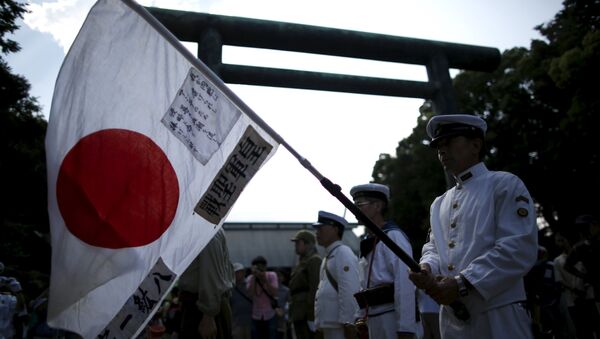 Beijing on Saturday expressed a strong protest and dissatisfaction over a visit by three Japanese ministers to controversial Yasukuni Shrine in Tokyo, commemorating those who had lost their lives while serving the Empire of Japan.

BEIJING (Sputnik) — The ministers visited the shrine, which is considered a symbol of Japanese militarism in China and neighboring Asian countries, on Friday, August 14, the 70th anniversary of Japan's WWII surrender.

"The Yasukuni Shrine is a symbol of militarism and external aggression. August 15 [Japan Standard Time, 1945] was the day when Japan declared unconditional surrender. Japanese officials have chosen this day to honor the memory of WWII A-Class criminals that once again demonstrated Japan's wrong attitude to the historic events. In this regard, the Chinese side expresses its strong dissatisfaction and protest," the Chinese Foreign Ministry said in a statement published on its website.

Never Too Late to Apologize: Japan's PM Abe Reiterates Remorse Over WWII
The Yasukuni shrine was founded by Emperor Meiji in 1869. It lists about two and half million civilians and government officials who died in wars between 1867 and 1951, as well as about 1,000 war criminals, 14 of which are considered to be A-Class, or those internationally acknowledged to have participated in a joint conspiracy to start and wage war.

Visits to the shrine by Japanese officials have repeatedly arisen concerns and discontent among many Chinese and Korean officials, who consider the honoring of the war criminals to be controversial.