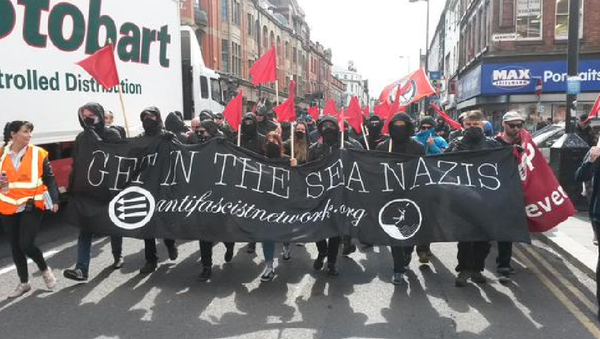 Two British anti-fascist groups are rallying in Liverpool on Saturday ahead of a Neo-nazi group's racist march, local media reported.

MOSCOW (Sputnik) — The activists of Britain's largest anti-fascist organizations, the Anti-Fascist Network (AFN) and Unite Against Fascism (UAF) have taken to the streets of Liverpool to oppose the so-called White Man March due to be held in the city later in the day, LiverpoolEcho news portal reported.

In response, the nationalist group said the "city will go up in flames," if the march is banned.

AFN spokesman Tom Ascaso told LiverpoolEcho news portal on Thursday that people of Liverpool could not rely on the state banning the neo-Nazi march to prevent it from happening, and needed to block the streets and prevent the march from taking place.

Just heard that my home city Liverpool is to hold a White Man March tomorrow, so on that note I wish you a good night pic.twitter.com/iOdEDSO4EK

According to the news portal, local police said they had a plan to keep the public safe as both nationalist protests and counter-rallies were expected to march within two hours of each other.

The rallies come amid a migrant crisis in Europe, particularly in the Unites Kingdom, as thousands of migrants are attempting to board moving Eurotunnel trains destined for Britain.