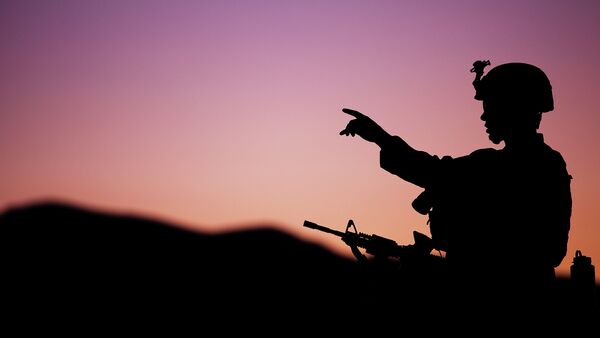 Plagued by infamously a short and "self-serving" memory, Washington believes that the ideologically driven Cold War against the Soviet Russia was "something" that started after 1945, Canadian scholar Michael Jabara Carley notes; however, the roots of the Cold War and Russophobia phenomena run deep in history.

Practically every week, a new Western journalist proclaims the beginning of a "new cold war" between Washington and Moscow, referring to US/NATO muscle flexing on Russia's borders and the growing hostility toward Russia in the West, Canadian historian Professor Michael Jabara Carley of the University of Montreal points out, adding that the phenomenon has long history.

"The Cold War, I would remind readers, started in November 1917 when the Bolsheviks took power in Russia… Undiscouraged and terrified of a socialist revolution in Russia, the so-called Entente [Great Britain and France] tossed fat rolls of banknotes to anyone who said he would fight the Soviets. The Entente sent its own forces to the four distant corners of Russia to do the job themselves. This was the ‘Allied' intervention which continued until the beginning of 1921 in the west and until 1922 in Eastern Siberia," Professor Carley elaborated.

Poland Needs World Class Media, Not 'Festival of Lies and Russophobia'
"The same old gang" — the US, France, and Britain — was behind "Sovietophobia." However, unfortunately for Western elites their soldiers refused to fight a new war against Soviet Russia after the disastrous First World War. The West's intervention in Russia ended ingloriously.

Remarkably, "Russophobia and Sovietophobia did not end after the failure of western military intervention. On the contrary, enmity continued right up until the Nazi invasion of the USSR in 1941," the historian pointed out in an article published by Strategic Culture Foundation.

Sovietophobia was especially intense in the 1920s and 1930s, and prevented the formation of an alliance against an emerging Nazi Germany, Carley stressed.

Moreover, US economist Guido Giacomo Preparata exposed in his book "Conjuring Hitler: How Britain and America Made the Third Reich," that the US and British elites facilitated the rise of Adolf Hitler and Nazi Germany as a driving force that could deal a lethal blow to the USSR.

Old Tactics, New Land: Ukrainian Crisis Echoes European Conquest of America
According to Carley, the 1941 Grand Alliance of the US, Britain and the Soviet Union resembled "a kind of inadvertent shotgun marriage" prompted by the common danger of Hitler's Germany.

Despite the USSR suffering huge losses during the Second World War, it defeated Nazi Germany. In response, however, the British leadership developed the "Operation Unthinkable" in 1945 aimed at nuking the Soviet Union.

"The outrageous 'Operation Unthinkable,' a 1945 British contingency plan for war with the USSR, merely underlined undiminished British Sovietophobia, shared of course by the United States, absent President Franklin Roosevelt who died in April 1945. One might argue that the Cold War resumed even before the end of World War II," Carley underscored.

Washington still believes due to its "notoriously short" and "self-serving" memories, that the Cold War was something the West unleashed after 1945. "They were wrong about that, even though their idea, like a zombie, is hard to kill," the professor noted.

But the point is that the Soviet Union collapsed decades ago. Seemingly, there is currently no reason for Sovietophobia in the West.

What we see today is a "traditional Russophobia" that started even before the First World War, the historian noted. And this Russophobia is prompted by "US intolerance of any state unwilling to bow before the Great American Hegemon." Even when Russia was on its knees in 1990s during the rule of "the corrupt, drunken puppet" Boris Yeltsin, Washington pushed ahead further NATO expansion toward Russia's borders.

Can’t Listen to This Anymore: EU Residents Tired of Western Media Lies
Interestingly enough, the term "Russophobia" was first used by Fyodor Tyutchev (1803 — 1873), famous Russian poet, diplomat and politician in reference to growing Western hostilities against Russia on the "eve" of the Crimean War (1854-56) between the Russian Empire and an alliance of France, Britain, the Ottoman Empire, and Sardinia.

Historians elaborate that the so-called "Russophobia campaign" actually started as early as the 1820s — instigated by Britain — following Russia's glorious victory over Napoleonic France in 1812-13.

"British hostility towards Russia had recurred periodically ever since the late eighteenth century. In had become increasingly apparent, albeit in a gradual and evolutionary fashion, in the years after Waterloo… Fear of Russia's aims in Europe and Asia surfaced as early as 1817," American historian Edward M. Spiers wrote in his book "Radical General: Sir George de Lacy Evans, 1787-1870."

Britons were especially concerned about their dominance in Central Asia and the "Russian threat" to their hegemonic ambitions in the region. According British diplomat Sir Martin Ewans, in the 1820s-30s London deemed that it would be "unwise" to allow the Russian Empire to extend its influence over Caucasus, Persia and Afghanistan. "That Russophobia existed is undeniable," Sir Ewans remarked in his book "Conflict in Afghanistan: Studies in Asymmetric Warfare."

Remarkably, in the 1860s, Russian ethnologist, philosopher and historian Nikolai Danilevsky slammed the Western propaganda machine for spreading distorted information and blatant lies about the "Russian threat" and imaginary "expansionist ambitions" of the Russian Empire in his book "Russia and Europe."

Professor Carley warned that those who attacked Russian and teased the Russian Bear "have generally done poorly against Russian armies."

"Even the Mongols, who destroyed Kievan Rus in the 13th century, were eventually driven out. Other invaders, Teutonic knights, Poles, Lithuanians, Turks, Swedes, French, Germans, not to mention the Entente in 1918-1920, or the Japanese from 1918 to 1922 and in 1945, all eventually fared badly," the professor stressed.

"[The] Russophobia nourishing US and western belligerence is not a "new cold war." It's an older pre-1914 type of conflict, and we all know where that led," the Canadian historian concluded.