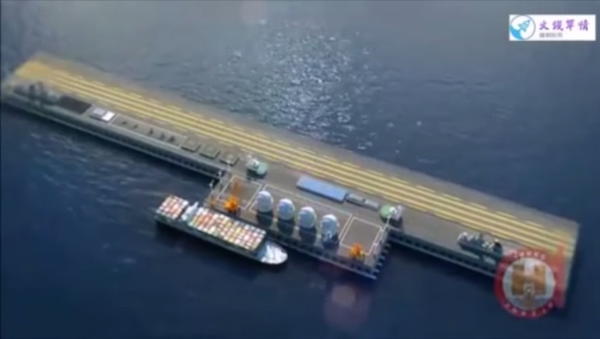 © YouTube/NavyRecognition
Subscribe
Two Chinese companies are to build miles-long floating platforms in the ocean that could house airstrips, docks, helipads, barracks or even "comprehensive security bases," according to one company executive.

"So far these are only in the design and research phase," Feng Jun, chairman of Hainan Offshore Industry, a company developing the technology, was quoted as saying by the Financial Times.

To date, the technology has been used primarily by companies drilling offshore for oil and gas.

While the Chinese companies are stressing the civilian potential of the platforms – shopping centers and tourist destinations – executives have also acknowledged that the floating structures could one day be used by China's Navy, the FT reported.

The announcement comes at a time when Beijing is building man-made islands in the South China Sea, where China and other nations in the region have overlapping territorial claims. There is speculation that Beijing will use the islands to house military facilities.

"Under the increasingly complicated South China Sea situation, Hainan Offshore Industry adheres to the principle 'when the sovereignty of the state is challenged, time and tide wait for no man.'"

"Planting one of these in the middle of the South China Sea would be a terribly provocative act," Richard Bitzinger, an authority on maritime security, told the FT.

China's military appears to have shown interest in VLFS projects at forums and conferences for the military and defense industries. But a spokesman for China's defense ministry this week said he is not aware of plans for procuring or using such structures, the FT reported.

Jidong Development, a state-owned company, is contributing most of the research funding to the joint project, local media reported. This first VLFS, being built near Beijing, would be used as a "deep sea comprehensive security base."

Bitzinger, the maritime authority, doubts their military value in a conflict. They would be "expensive and hard to move around," he told the FT, adding that China would be better off with more aircraft carriers.

000000
Popular comments
jas , Pretty much ANYTHING that any other country does to protect it's own interests, is seen as "a terribly provocative act" by the united snakes - even if it has nothing to do with them.

Ann
8 March 2016, 09:07 GMT
000000
Newsfeed
0
New firstOld first
loader
LIVE
Заголовок открываемого материала
Access to the chat has been blocked for violating the rules . You will be able to participate again through:∞. If you do not agree with the blocking, please use the feedback form
The discussion is closed. You can participate in the discussion within 24 hours after the publication of the article.
To participate in the discussion
log in or register
loader
Chats
Заголовок открываемого материала
Worldwide
InternationalEnglishEnglishMundoEspañolSpanish
Europe
DeutschlandDeutschGermanFranceFrançaisFrenchΕλλάδαΕλληνικάGreekItaliaItalianoItalianČeská republikaČeštinaCzechPolskaPolskiPolishСрбиjаСрпскиSerbianLatvijaLatviešuLatvianLietuvaLietuviųLithuanianMoldovaMoldoveneascăMoldavianБеларусьБеларускiBelarusian
Transcaucasia
ԱրմենիաՀայերենArmenianАҧсныАҧсышәалаAbkhazХуссар ИрыстонИронауОssetianსაქართველოქართულიGeorgianAzərbaycanАzərbaycancaAzerbaijani
Middle East
Sputnik عربيArabicArabicTürkiyeTürkçeTurkishSputnik ایرانPersianPersianSputnik افغانستانDariDari
Central Asia
ҚазақстанҚазақ тіліKazakhКыргызстанКыргызчаKyrgyzOʻzbekistonЎзбекчаUzbekТоҷикистонТоҷикӣTajik
East & Southeast Asia
Việt NamTiếng ViệtVietnamese日本日本語Japanese中国中文Chinese
South America
BrasilPortuguêsPortuguese
NewsfeedBreaking
00:31 GMTOmicron Mitigation: What Travelers to the US Need to Know Beginning Monday
YesterdayFauci Speechless After US Senator Asserts Epidemiologist 'Overhyped' COVID-19 Pandemic
YesterdayFrench Presidential Candidate Zemmour Attacked at Villepinte Rally - Reports
YesterdayTrump Slams Top US General Milley as 'F**king Idiot' Over Afghanistan Withdrawal
YesterdayWWII Veteran And Longtime US Senator Bob Dole Dies at 98
YesterdayIran Blames US Stubbornness on Sanctions for Breakdown of Vienna Nuke Talks
YesterdayZemmour Says He 'Would Like' to Withdraw France From NATO
YesterdayIsraeli Deputy Defence Minister Dodges Question About Tel Aviv's Complicity in Natanz Blast
YesterdayCorridors of POWDER: Brits React to News of Drug Sniffer Dogs in Parliament
YesterdayMercedes' Hamilton Takes Win in First Saudi Arabian GP After Chaotic Battle With Verstappen
YesterdayTucker Carlson Was Reportedly Friends With Hunter Biden, Intervened in Media Report on His Behalf
YesterdayPutin: People Vaccinated With Sputnik V Should Not Be Deprived of Right to Travel
YesterdayPolish Authorities Officially Confirm Detention of Russian Ship Ruslana
YesterdayBelgian Police Use Tear Gas After Clashes With COVID-19 Protesters Broke Out in Brussels - VIDEO
YesterdayTrump's Media Company Says Raised $1Bln From Investors
YesterdayOrigin of Water on Earth: Mystery Solved?
YesterdayIdentity of Baroness Mone's Accuser Reportedly Revealed as She Denies Racist Claims Against Her
YesterdaySniffer Dogs Could Be Deployed in UK Parliament as Cocaine Found Near PM’s Office, Report Says
YesterdayDemocrats Were Wrong After All: IRS Data Reportedly Shows Trump Tax Cut Benefited Middle Class Most
YesterdayOvechkin Repeats NHL Record of Scoring 20 Goals in 17 Consecutive Seasons