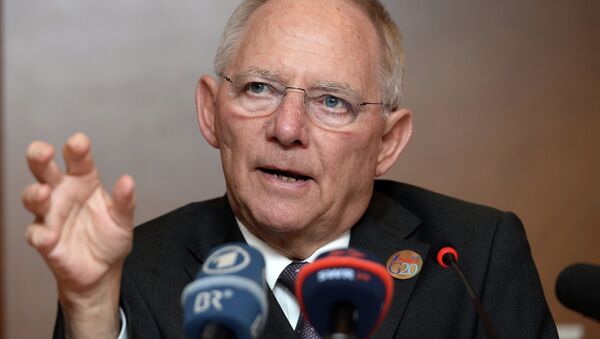 German Finance Minister Wolfgang Schaeuble says that IMF is expected to contribute funds to the third bailout package for Greece in October.

The meeting led to the approval of an €86 billion ($93 billion) bailout package aimed at rebuilding Greece's economy, provided that Athens follows through on its reform commitments.

Schaeuble told reporters that he was confident that Eurozone ministers would agree on a “common approach to Greek debt sustainability” in October, which would lead to the IMF joining the European Stability Mechanism (ESM) in providing Greece with funds.

European Commission Expects 2.3% Decrease in Greece’s GDP in 2015
ESM Managing Director Klaus Regling said at a press conference on Friday that it is not yet clear how much money the IMF might provide.

European Commission President Jean-Claude Juncker stressed on Friday that the IMF’s participation in the third bailout is crucial for the Eurogroup.

Under the new aid package, Greece will receive the first tranche of €26 billion in two payments. The first sub-tranche of 10 billion will be made available immediately, while the second sub-tranche of €16 billion will be disbursed to Greece in several instalments, starting with a first disbursement of €13 billion by August 20, which is when Greece is due to make a €3.4 billion ($3.8 billion) repayment to the European Central Bank (ECB), one of its major international money lenders.