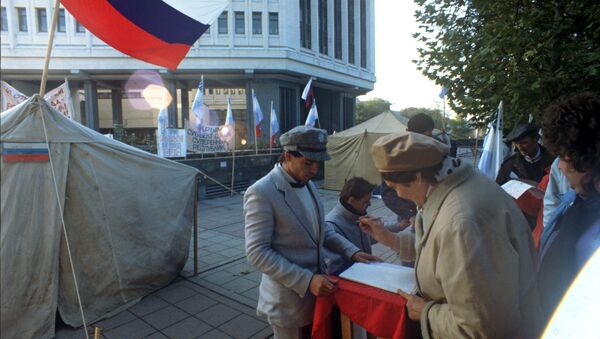 Those who continue to call Crimea’s reunification with Russia an “annexation”, apparently aren't aware of the fact that back in 1991, while signing the Belovezhskaya accord on the dissolution of the USSR, then-Ukrainian president Leonid Kravchuk almost gave up the Peninsula to Russia, but former Russian President Yeltsin did not want to accept it.

Crimea's first and only President, Yuri Meshkov, has revealed that Crimea could have become part of Russia long ago.

Unfortunately for the predominantly Russian-speaking, ethnically Russian population living there at the time, the first President of the Russian Federation, Boris Yeltsin, “did not give a damn” about Crimea. 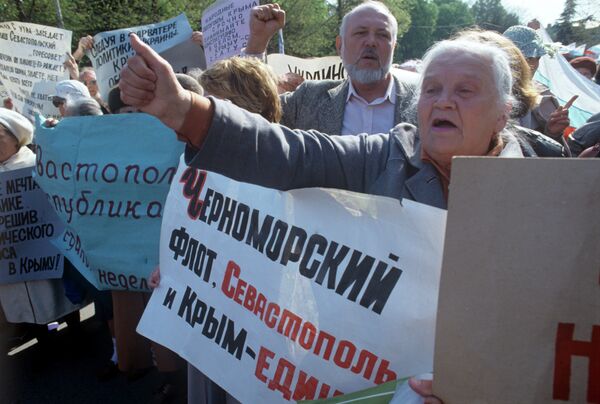 A woman with a banner saying “Black Sea Fleet, Sevastopol and Crimea are a unified whole” 1992
© Sputnik / Alexey Fedoseev
/
Go to the photo bank

In an interview with the Russian online newspaper Lenta.ru, Meshkov recalled what the first President of Ukraine, Leonid Kravchuk, said to him once about the status of the peninsula.

Back in December 1991, while signing the Belovezhskaya accord on the dissolution of the USSR and creation of the Commonwealth of Independent States, Kravchuk was ready to give up Crimea with “all its Tatar problems”.

Then-president Yeltsin, however did not care much about the area, and did not move a finger to accept the gift.

Moreover, in May 1992 the Supreme Soviet of Russia declared the 1954 transfer of Crimea had "no legal force", because it was adopted "in violation of the Constitution (Fundamental Law) of the Russian SFSR and legislative process".

However, Yeltsin once again showed no interest in the event.

Yuri Meshkov also recalled that Crimea had wanted to be part of Russia ever since the collapse of the Soviet Union. 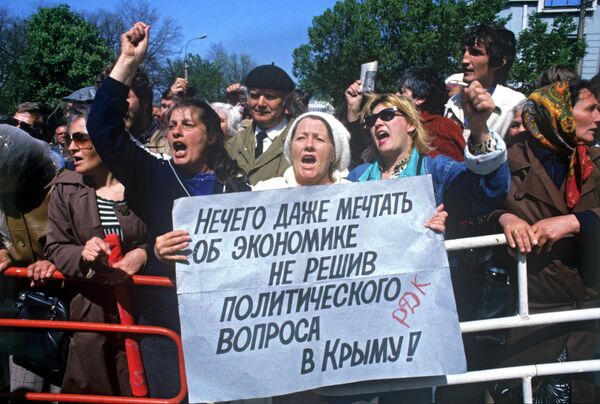 In May 1992, what was then called the Supreme Council of Crimea and is now known as the State Council of Crimea, declared its conditional independence from Ukraine, dependent on a referendum that was planned for August of the same year.

However, the Ukrainian Parliament then ruled that the declaration was illegal, and gave the Supreme Council a deadline of 20 May to rescind it. Although the Supreme Council complied with the order on 22 May, the referendum was merely postponed rather than cancelled.

'Russia Has Done More for Peace' in Post-Soviet States Than Anyone Else
The referendum idea was resurrected in 1994 after Yuriy Meshkov was elected President of Crimea in January.

Voters however were not questioned "Are you for an independent Republic of Crimea in union with other states?", as was planned in 1992, but rather whether they were in favor of greater autonomy within Ukraine, whether residents could have dual Russian and Ukrainian citizenship, and whether presidential decrees should have the status of laws.

All three proposals were approved.