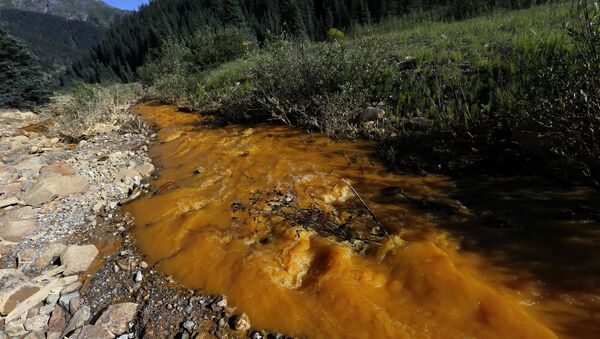 Barely one week since a massive wastewater spill turning stretches of the Animas River orange, the EPA has officially declared the water safe to drink. But many are still concerned about the long term health effects.

After the US Environmental Protection Agency accidentally unleashed 3 million gallons of toxic wastewater from an abandoned mine in Colorado, communities were forced to cut off water intake from the polluted waterways.

Now, only one week since the spill, the EPA claims that the water quality of the Animas River has "returned to pre-event conditions."

"We have water quality data from August 7,8, and 9 from La Plata County that show levels have returned to pre-event conditions," agency administrator Gina McCarthy said during a news conference on Wednesday.

Environmental conditions along the Animas weren’t great to begin with. Toxic mine waste has been slowly leaking into the river for decades, leaving its headwaters unable to support aquatic life. That quality improves further downstream, but last week’s spill has left an uncertain amount of heavy lead and arsenic particles along the riverbed.

As the Colorado department of public health and environment prepares to reactivate its water intakes systems, many are still concerned about the long-term effects of the toxins.

"There will be a source of these contaminants in the rivers for a long time," hydrologist Tom Myers told the Associated Press. "Every time there’s a high flow, it will stir it up and it will be moving those contaminants downstream."

"The company that owns this mine has apparently allowed dangerous conditions to fester for years, and the mishandling of clean-up efforts by the EPA have only made a bad situation worse," New Mexico Sierra Club organizer Robert Tohe said, according to Common Dreams.

While offering assurances, the EPA has admitted that its analysis of the heavy metal load left in the water column and sediment has yet to be completed. Until that data is known, the agency can say little about the long-term effects on humans and wildlife.

A number of environmental groups have criticized the agency’s response to the spill, which has been downplayed since the beginning. After initially estimating that the spill amounted to one million gallons, that figure was later tripled. The EPA’s response time has also been described as slow.

Given these failings, some are concerned that the agency could avoid accountability years down the line, when those long-term effects become clear.

"We have to be vigilant as attorneys general, as the lawyers for the state, as protectors of the environment, to be sure that the assurances that we received today from the Environmental Protection Agency are the same in two years, in five years, even ten years when we discover what the damage to the environment actually is," Colorado Attorney General Cynthia Coffman said, according to Common Dreams.

The damage also extends far beyond La County. After making its way into the Animas River from Cement Creek, the orange plume also continued into the San Juan. Colorado, New Mexico, and the Navajo Nation all declared a state of emergency, and Utah did the same on Wednesday.

With the wastewater moving toward Arizona, another state could soon follow suit.

And then there’s the fact that the leak is still flowing. To mitigate the damage, the EPA has built a pair of collecting pools outside of the mine, where officials chemically treat the waste to help break down pollutants before entering Cement Creek.

Still, that process is only partially effective.