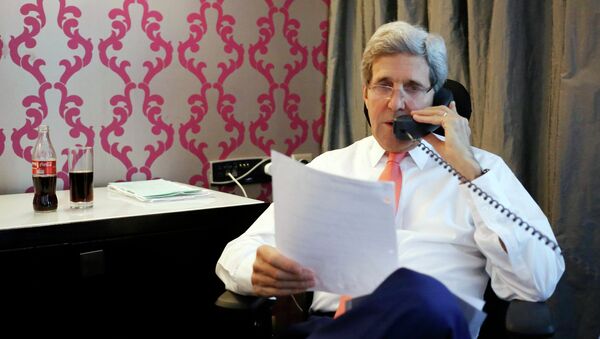 John Kerry spoke over the telephone with Sergei Lavrov on Thursday and discussed the alleged visit of Iranian Quds Force Commander Qasem Soleimani to Moscow, US State Department said.

Earlier on Thursday, the US and Russian diplomats held a telephone conversation at the request of Washington, to discuss pressing global developments and a number of issues of the Russian-US relations.

Iranian FM May Talk Joint Projects in Crimea During Moscow Visit - Expert
On August 6, Fox News reported that Soleimani, who is subject to international sanctions, flew to Moscow on July 24 to meet with President Putin and Defense Minister Sergei Shoigu.

The Kremlin however, has denied claims about the IRGC Commanders alleged travel.

On Wednesday, the State Department said Washington would work with the UN Security Council and the UN’s Iran panel of experts to ensure a full and adequate investigation into the matter as well as sufficient follow up are undertaken.