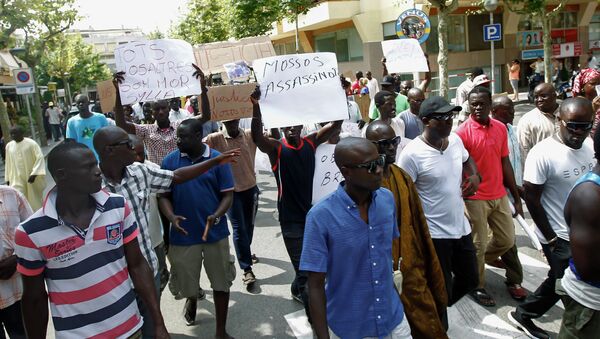 The Spanish Immigration and Local Policies Network has asked the country’s Attorney General’s Office to open an investigation into the death of a Senegalese national who died during a recent police raid, the organization’s spokesman told Sputnik Thursday.

Critics Say Spanish 'Gag Law' Will Turn Country Into a 'Police State'
MADRID (Sputnik) – Mor Sylla, a 50-year-old Senegalese man, fell to his death from a balcony during a Catalan police operation within a crackdown on illegal street vendors on Tuesday.

Later in the day, about 200 activists clashed with police in the eastern Spanish town of Salou during protests against police brutality and racism, triggered by Sylla's death. The protesters carried signs reading "Enough of Violence" and "Stop Racism."

"We are seeing a lot of opaqueness in this case, there are contradictions in the police's version, so we asked the prosecutor to open an investigation, we want to make all the information available on this case public," David Fernandez said.

The man’s family also doubts the police's version of events, according to the organization.

"They said he fell from his balcony when the policemen entered the flat, but hours later they asserted that it had happened when they entered the room. They don’t have an official version," Fernandez said.

The Black Lives Matter movement made headlines in 2014, after a series of police killings of unarmed African American men in the United States. The group has organized a number of rallies against police brutality and has urged the authorities and the public to focus on underlying issues of racism in the country.